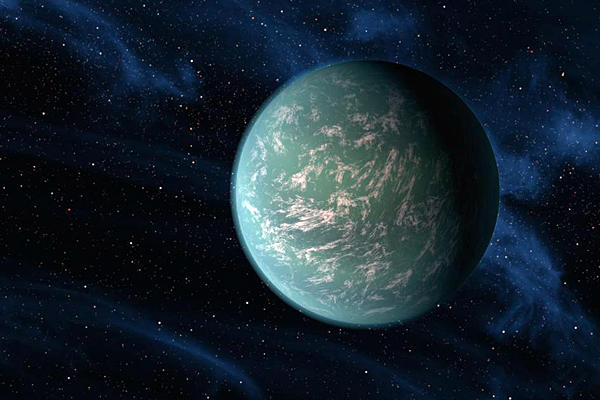 This undated artist rendering shows Kepler-22b, a planet known to comfortably circle in the habitable zone of a sun-like star. So far, astronomers have detected more than 840 planets orbiting other stars, a handful of those are super Earths that fall within their stars’ habitable zones.
Courtesy of JPL-Caltech/Ames/NASA/AP

Written by Pete Spotts for The Christian Science Monitor

Astronomers have uncovered evidence for a super Earth-size planet in the habitable zone of a star 42 light-years away in the southern-hemisphere constellation Pictor.

If the data truly signal a planet, the object could host liquid water on its surface, the team estimates. Liquid water is seen as a key ingredient for organic life.


So far, astronomers have detected more than 840 planets orbiting other stars. A handful of those are super Earths that fall within their stars’ habitable zones. But only two – including this newly announced planet candidate – are far enough away from their stars to allow for a day-night cycle. The others orbit so close to their stars that they’ve become tidally locked, presenting the same face to their stars as they swing about their orbits.

A day-night cycle on the new planet “improves its chances of hosting an Earth-like climate,” the team wrote in the formal report of their discovery, which has been accepted for publication in the journal Astronomy and Astrophysics.

The host star, tagged as HD 40307, has about 77 percent of the sun’s mass and is a sun-like 4.5 billion years old. Researchers previously had detected three super Earths orbiting the star. The potentially habitable planet is one of three additional planet-candidates the team is reporting around HD 40307.

It’s a uniquely crafted system. Five of the six planets orbit within a scant 23 million miles of the star. HD 40307g, the outermost of the six, orbits another 33 million miles out. That brings all six orbits well within the radius of Mercury’s orbit around the sun. Mercury is the innermost planet in our solar system, orbiting the sun at an average distance of 58 million miles – close enough to broil the sun-facing hemisphere of this slowly turning planet to a toasty 801 degrees Fahrenheit.

But HD 40307g’s host star is faint enough that the planet, with a year some 200 days long, falls well within the star’s habitable zone.

Based on calculations involving a similar, habitable-zone super Earth discovered by NASA‘s Kepler mission, Kepler 22b (which is also the other super Earth with a day-night cycle), the team posits that the planet could be a mini-Neptune, with a rocky core and thick atmosphere.

Other astronomers have been trying to confirm the existence of the initial three planets by hunting for the slight dimming a planet imparts to its star’s light as it swings in front of the star during its orbit – and event known as a “transit.” But no one has spotted anything yet.

Given that it is easier to spot transits for close-in planets than for more-distant planets, the chances of catching a transit for HD 40307g as well would seem remote. Astronomers are interested in such detections because a transit would not only provide confirmation of the planet’s existence, but also allow astronomers to infer a great deal about the planet, including its density.

Confirmation will be a challenge without space-based telescopes designed to image planets directly, the team acknowledges. HD 40307g could be the first planet spotted by any such future observatories. Because it is so far from its host star, HD 40307g’s reflected light is less likely to be swamped by the light from its star.

Yet even without the prospect of immediate confirmation, the team is confident it has picked up signatures from bona fide planets.

With the team’s confirmation of the star’s inner three planets and the discovery of three more candidates, “I see no reason to doubt the existence of these planets,” says Mikko Tuomi, a researcher at the University of Hertfordshire in Britain and a team leader. The system wouldn’t exist if the planets’ true masses weren’t close to those the team calculates as minimums, he explains. Otherwise the system would have been unstable.

The team, led by Dr. Tuomi and Guillem Anglada-Escude of Göttingen University in Germany, pulled the raw data from public archives of the European Southern Observatory.

Other astronomers had taken spectra of HD 40307 using an exquisitely sensitive spectrometer bolted to the back of a 3.5 meter telescope the observatory operates high in the Chilean desert. In 2008 they announced the discovery of the inner three planets.

They detected the planets by the wobble they impart to the host star as they orbit. This wobble shows up in a back and forth shift in the spectra from the star.

But based on what astronomers have been learning about planetary systems outside the solar system, where there were three, there were likely to be more.

Armed with a newly crafted software package, Toumi and colleagues went back and reanalyzed the data. They not only detected the original three, but they added spotted three more – and by an odd technique: by throwing data out.

Typically, Toumi explains, the intensity of the wobble in a star’s spectrum as planets orbit appears up and down the various colors, or wavelengths of light. But natural changes to a star’s surface on time scales ranging from days to years can inject faux wobbles as well.

Fortunately, those faux wobbles tend to manifest themselves toward the blue end of the spectrum, Toumi says. So the team focused its analysis on the red end. That, plus a fresh approach to other aspects of the analysis, pulled the newest planets out of the data.

“Rather counterintuitively, throwing some data away led to an increased precision,” which yielded the detections, Toumi writes in an e-mail.

Are you scientifically literate? Take our quiz