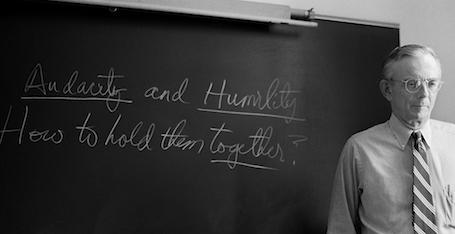 Oh my. This article by Chris Hedges about his teacher, the Rev. Coleman Brown, left me inspired and lonely and wondering: What if we all had a teacher like Coleman Brown? Not just a teacher who inspires us and teaches well, but one that cares about their students and teaches beyond the classroom walls.

I have learned a great deal from inspiring people. I am amazed/amused at how many of them are seminarians who though they went on to a career outside of the church, brought their deep faith to their careers. Bill Moyers an ordained Baptist from Texas who served in the Johnson administration, but is better known for his TV programs on social and political justice issues. Chris Hedges more recently ordained in the Presbyterian Church after decades as a war reporter, brings his deep faith into his writing, and his teaching within the US prison system. (Of his rejection for ordination thirty years earlier, he wrote that “going to El Salvador as a reporter was not something the Presbyterian Church at the time recognized as a valid ministry, and a committee rejected my ‘call”) Cornell West, is the son of a Baptist Preacher, and is a Professor of Philosophy and Christian Practice at the Union Theological Seminary. And of course Jimmy Carter whose dedication to putting his faith in action is world renowned.

Other media figures include John Stewart and Stephen Colbert, who are not ordained teachers of their faith, but who proudly bring their respective faiths (Judaism and Catholicism) into their rather ribald arena of discussion on important issues of our time. Which goes to show you can be hip and open about faith at the same time.

It occurred to me as I read Chris’ article that I missed having a relationship like this with any of my teachers. I always thought office hours were for appointments only, and only for problems. Perhaps that was because I was a science major at a time when their were few women in those classes, and meeting privately was seen as an assignation(tryst) rather than an assignment.

How I would love to be able to sit at a round table, or a kitchen table with the likes of these.

I have had the distinct pleasure of attending a small, rural church, where the Preacher was a PhD Philosopher. In addition to amazing enlightening sermons, he taught a weekly class based loosely on ‘A Course in Miracles’ but in truth our discussions ranged from the Bible, to Nietzsche, to popular culture, and beyond. My home church at one time was led by a Farmer/Preacher who in retrospect may have been rather Wendell Berry like, and later by a young Pastor who had a knack for bringing great art into the Sunday School to instigate discussion.