Posted on March 31, 2017 by OEN Leave a comment
Jerry Mander – Wikipedia
Jerold Irwin “Jerry” Mander (born May 1, 1936)[1] is an American activist and author, best known for his 1977 book, Four Arguments for the Elimination of Television. His most recent book, The Capitalism Papers, argues against Capitalism as a sustainable and viable system on which to base an economy.
en.wikipedia.org 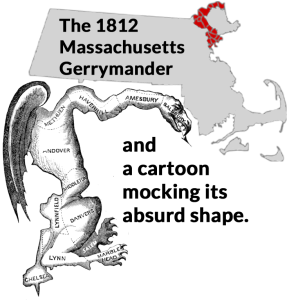 First of all, let me clarify something. This person is not the problem. In fact, it appears that he is on our side (https://en.wikipedia.org/wiki/Jerry_Mander).

Having taken care of that detail, let it be clear that I am writing about the drawing of congressional boundaries to maximize the number of elected politicians of a particular party. How this happens, is that after a census, in every year ending in a zero, state legislatures are commissioned to redraw district boundaries for the members of the House of Representatives. This is made necessary because after 10 years, some states gain or lose congress members, and congressional districts themselves gain or lose population so that they no longer contain approximately the same number of residents. Given this task, the party with majority representation in the state legislature, can dictate the new boundaries of congressional districts, with relatively little opposition if that party holds majorities in both houses of the state legislature as well as the governorship. That might seem like a fairly uncommon scenario on the surface, but in fact, because individual states tend to be heavily tilted toward either Republicans or Democrats, this is apparently the case in most states. Only “purple states” are likely to have a mixture of parties at these 3 levels. Thus, the majority party tends to act in such a way as to perpetuate and even increase its majority by drawing as many favorable districts as possible. Basically, what happens is that the voters who tend to vote for the minority party in the state, are relegated to a few districts where they have a huge majority (perhaps 90% for instance) and “safe seats,” while the majority party draws as many districts as possible which have a sufficient majority of people who vote for their party, such as 55 to 60%, which is enough with reliable voters to be fairly certain of victory. This is also a racial issue, by the way, because with Republican gerrymandering, racial minorities tend to be relegated to a few urban districts, and thus once again, denied proportionate representation.

Both Democrats and Republicans have commonly engaged in gerrymandering when they have been able to. However, the current version of Congress is dominated by Republican gerrymandering, due to the events of 2010. After the election of Obama, the Koch brothers funded “astroturf” Tea Party movement, along with complacency by more liberal voters who voted in 2008 but weren’t motivated enough to in 2010, resulted in Republican domination in many states. Not only did they take back the majority in Congress, but also held majorities in most state legislatures as well as most governorships. These Republican dominated states wasted no time in using the 2010 census to redraw congressional boundaries to maximize the number of Republicans in Congress in subsequent elections from 2012 to 2020. In fact, a great deal of GOP money was devoted to this project. As a consequence, for example, more voters voted to put Democrats than Republicans in the House of Representatives in 2012, yet, Republicans maintained the majority there. By rights, if representation were proportional to the vote, Democrats would have had the majority. Thus, gerrymandering shifted the entire trajectory of U.S. politics in this instance.

In the two subsequent elections, in 2014 and 2016, Republicans have won a slight majority of the votes for House of Representative members. However, the effects of their gerrymandering in 2010 still acted to increase the number of Republicans elected beyond the percentage of voters who favored their candidates. The following article discusses what happened in 2014 (https://www.republicreport.org/2014/gerrymandering-rigged-the-2014-elections-for-republican-advantage/). In fact, some of the “purplest states” showed the largest skewing of representation toward Republicans. States where the effects of gerrymandering was particularly egregious in favor of the GOP included: “Ohio, Pennsylvania, Virginia, North Carolina, Georgia, Florida, Texas, Louisiana, Arizona, Tennessee and beyond.” Although I have not found a similar analysis of last year’s election, the same dynamics appear to apply. Meanwhile, only Maryland and Illinois engaged in gerrymandering from the Democratic Party side after the 2010 elections. In fact, the article that I just referenced said of the 2014 gerrymandering situation: “…in many ways, the game was rigged from the start. The GOP benefited from the most egregious gerrymandering in American history.”

Thus, Republicans may brag about their so-called “mandate” in Congress, as though they enjoy enormous popularity among the public. However, declining percentages of registered Republicans, and voting records tell a different story. Much of their advantage in Congress is due to the gerrymandering of 2010, something which I watched with dread at the time — and my fears have been realized. Also, in direct opposition to the media and GOP narrative, last year’s election was actually something of a success for Democrats, just not enough of a success to be obvious or make a large difference. Democrats actually gained 7 seats in the House of Representatives and 3 seats in the Senate, as well as winning the popular presidential vote by more than 2.8 million votes, only to lose it to the Electoral College. Another interesting fact about last year’s election, a corollary to my previous post, is that more people actually voted for Democrats in senatorial races than voted for Republicans; yet, Republicans won most of those races, due to winning most of them in less populous states.

Given the current and growing unpopularity of Congress, especially the antipathy toward Republicans, as well as toward the president, there is reason for optimism among Democrats. However, the party will need to heed the call of progressives and shift to the left to give voice to and representation to the majority of voters, who are well to the left of Congress as a whole.

But what can be done about gerrymandering? Actually, there is a solution to gerrymandering which several states have adopted — independent commissions which draw sensible congressional boundaries. It turns out that when done (surprise, surprise), it tends to favor Democrats more than the previous, gerrymandered method. States which have adopted such measures include California, Arizona, and Washington State. Also, Australia, Canada and the U.K. have adopted measures to require non-partisan organizations to draw political boundaries for districts of government representatives in those nations. There is no reason that we could not do the same in the United States, which would make elections more fair and competitive. The only thing that is stopping that, is the party which is now in power, and that party needs to be stopped.

I am looking forward to the day when gerrymandering is a thing of the past; this will be one important step leading to better governance. I think this can and should be accomplished in the foreseeable future.