Inspection- The Train to Vote Auschwitz

Posted on February 13, 2019 by Ken Carman Leave a comment 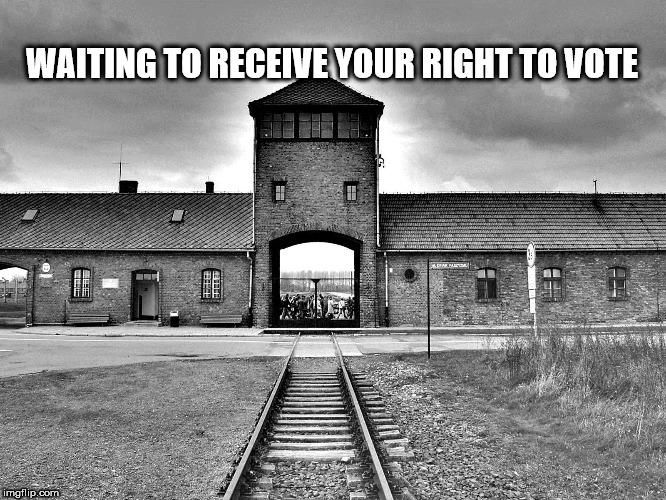 train from a time when people like future Justice Rehnquist challenged possible politically incorrect voters in precincts to today when just having a handful of close states affected by election fraud tactics means winning no matter how much the popular vote indicates that’s not what the people want. And that popular vote is only the start: far more voters were kicked off the rolls than Trump’s slim margins in those states that provided a College only victory suggest. These states had been so Crosschecked or Exact Matched, voter purged, polling hours limited, defective machine dominated in select areas it’s doubtful any single challenger would have changed that.
Meanwhile those whose votes have been targeted to ride The Train to Vote Auschwitz argue and accuse each other of causing the loss instead of working together to do all they can, advocate all they can, to shut the train down. The situation has been dire for a long time, and the more time passes the harder it will be to stop The Train to Vote Auschwitz.
Just like in Nazi Germany where it took years to get the train to the necessary level of genocide to take care of “the Jewish problem,” it took a while and lot of willing conspirators to lay the track, refine ways to increase the number of politically incorrect votes tossed onto the train, and select those that must be exterminated sooner than others.
And much like Nazis, those who so often complain about others talking about race and racism hypocritically focused on race and ethnicity as an efficient, effective, way to get rid of votes that tend to not be cast their way. But don’t worry: every time you express politically incorrect opinions be assured you name ends up on a list somewhere. They’ll get to you.
Election fraud tactics have been being perfected for over 20 years. It took governors, political operatives, political appointees, senators, representatives, ALEC, foreign entities working to start to solve the politically incorrect vote ‘problem.’ They had to make sure escaping the train would be close to impossible with shifting rules for IDs.
Like the 30s and 40s it became more efficient with industries helping too, like politically compromised election machine makers who program machines with proprietary software, or Crosscheck providing the lists of who gets eliminated or not.
Most states have had voter cards for many years. Picture IDs are not unreasonable: as long as the state pays for them and makes them very easy to get, certainly not selectively easy only for one side of the aisle and harder for those who tend to not vote their way. Otherwise it’s a poll tax with partisan intent: the opposite of what any free society should have.
As far as illegals voting goes where are all verifiable pictures of large numbers of proven illegal voters lining up to vote? Where are the massive amount of election workers testifying to all the illegal voters they had to let vote?
If any state ‘cleans up the voter rolls’ the state should have to prove in court on a one by one basis that any specific voter no longer qualifies. When it comes to rights the state should have the burden of proof, not individuals. That would mean using raw data lists to exterminate rights is not allowed. That would mean just sending a (confusing) card to some address is not allowed. That means public servants ‘accidently’ entering data wrong (Not “exact.”) should never help with vote genocide. No more purges for the sake political gain.
The Train has been traveling through more and more states as supposedly ‘elected’ politicians appoint appointees eager to fuel the train in new ways. The purge has spread across the nation. As the election in Georgia proves the extent they have been willing to go to increase the efficiency of the vote extermination express has become absurd, The very person who laid the track and ran the train gets to decide who votes, or not, in his own election?
It’s been almost 20 years since the highly compromised, highly partisan, Court decided votes didn’t need to be counted. In 2018 some politicians and politician wannabes finally stood up and insisted all the votes be counted. But any reasonable cynic would ask, “Why did we wait so long? Is it too late?” The conspiracy will only get bigger and more effective because they know it works. The goal: a one party, authoritarian oligarchy with a fake multi-party façade. You know, like Russia?
Is this hyperbole? Sure, but when a system, a “train” if you wish, is being designed to facilitate eliminating the votes of the politically inconvenient aren’t we closer to simply just eliminating them as some final solution? We should be thankful The Train to Vote Auschwitz is mostly just a metaphor for exterminating voting rights, not people.
For now.

-30-
Inspection is a column that has been written by Ken Carman for over 40 years. Inspection is dedicated to looking at odd angles, under all the rocks, and into the unseen cracks and crevasses, that constitute the issues and philosophical constructs of our day: places few think, or even dare, to venture.
©Copyright 2019
Ken Carman and Cartenual Productions
all right reserved