Posted on December 13, 2019 by Ken Carman Leave a comment 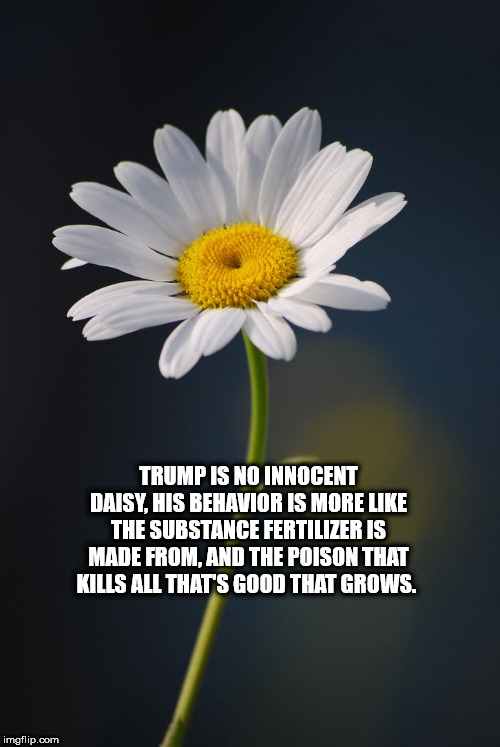 As everyone knows Donald Trump is a pure of heart gentle soul who has been nothing but harassed by the FBI, the CIA, New York State, his own appointees, the Clintons, the Bidens, of course the Democrats, less than perfectly loyal

Republicans: all who do nothing but name calling all aimed at the innocent as a new born lamb president. All he wants is the best for everyone and is never concerned with himself or his riches, whatever they may or may not be. As innocent as a single daisy growing in a field of foul corruption: none of his own doing.
Stop laughing. Stop. STOP IT!!!
I am a slow reader these days. Eyes grow less perceptive with age and I hate wearing readers. Reading quickly achieves the state of sleepy. So, unlike my English major turned Communications major college days, I read a page or two a night, at most a chapter. It’s a slow, yet deliberate slog,
The Mueller Report, like any political-based document, adds a lot of extra slog to the usual legalistic sludge. It is dry, tiny type; snooze inspiring prose using a flow-less font. And I understand why Democrats decided not to lean heavily on it impeachment time. Reading the Report is sometimes like watching a really bad lawyer desperately squirming in court: trying to find anything to excuse; or at least marginalize, his client’s guilty as hell behavior.
And when they do get into possible charges they can’t excuse most of that is buried even deeper in legalese. I used to enjoy reading legalese. No one could enjoy how deep they buried the lede here.
Most pundits on the left seem to think the Report is a clear condemnation. Of course some on the right have the opposite view; like it was the political version of being found “not guilty.” Donnie jerked back and forth according to what part was being reported on.
The president’s herky-jerkiness was to be expected from the shallow little tantrum filled boy in a man’s body. Of the other two: neither is completely true. The first suffered from being an incomplete, too casual, reading of the Report. The last is absolute utter nonsense coupled with BS Biden “Look over THERE instead,” strawman arguments.
While there’s no proof Joe got Hunter anything position-wise, thank god Donnie didn’t get HIS progeny any undeserved, high, positions.
Didn’t I tell you to stop laughing???
In section II there are some hints among the legalese at guilt, but it still keeps trying to excuse his behavior. Mueller seemed determined to declare most of what Trump said or did as, “Yes, there’s this, this and this, but we’re not in Trump’s mind so we can’t prove intent.” Whereas just the collective: often paid for by Republicans, Clinton accusations and accusers were treated as they were absolute proof of guilt? I will admit that at least Mueller was more professional in his approach, unlike the preening in front of the camera, head leaker, holier than everybody Starr.
If impeachment is all about going to collective accusations there’s plenty of Trump-ian admissions of guilt, including the supposed “perfect” call.
Caveat: I AM referring to the redacted version of The Mueller Report, which goes into redactions just when the real juicy stuff starts. ‘Thanks’ Bill Barr for doing to the rule of law what Robin Williams did to himself.
Just two examples out of many: in book two where Comey was fired I noticed Mueller’s analysis was bent far beyond backwards to marginalize any guilt: you see the firing of Comey supposedly isn’t proof of obstruction because the FBI investigation wasn’t going to stop. Trump threatens Cohen’s family but “it’s possible” it was merely intended as some public relations strategy?
Jimmy Jones’ Flavor Aid wasn’t meant to POISON, just to get his followers to behave?
Mueller felt because the desired result wasn’t achieved they couldn’t conclude intent? Let’s see how that excuse works for someone caught in the future attempting to assassinate the president.
I am not surprised the Democrats really didn’t use The Mueller Report for the articles of impeachment. I fear the Report would have been mostly useless for that. When you have repetitive behavior, like closed door meetings with the Russians, threatening those who might tell the truth, threatening their families, refusing to give over documents, banning even people NOT currently working in the White House from answering subpoenas, shifting lies about meetings with Russians, trying to get Mueller fired, firing an AG, heads of the FBI…
…none of this collectively goes to intent?
I’m not surprised at all they went with Ukraine and the abuse of power when, overall, Mueller’s ‘logic’ seems so, well, Trump-ian?