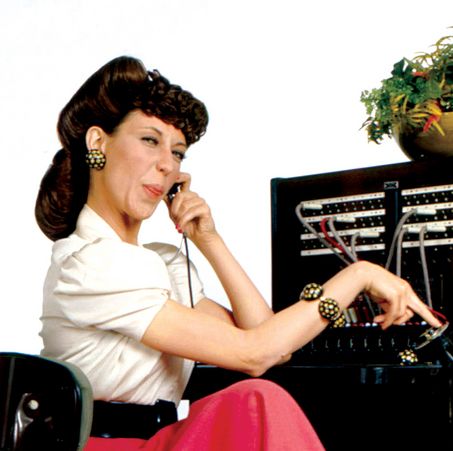 “Is that Debbie calling?”

Over the past 48 years I have had many favorite editions of my column Inspection. Usually they’re not all that political, like this one. I made some edits to update the column.-Ken

A gentle breeze caught me, briefly, creating monetary mental time travel as I walked through the campus. That breeze whisked me back to early Autumn, 1972; a day when the community college quad was bursting with students tossing frisbees to over eager, over grown, puppies. Couples were pretending to

study, but mostly studying each other. New students who attempted to sign up for English 101 with Gifford were busy switching to Mocko or Goodman because Gifford’s class was full. A radio played Chicago’s recent hit: Saturday in the Park.
But the music was only playing in my head when I returned to Mohawk Valley Community College; a record left skipping more than 30 years. Who forgot to turn it off? Me.
My answering machine was, and still is, a funny creature. Over the years I’ve had more animosity than not recording messages. My first creations on those continuous loop cassette machines were originally recorded on my old TEAC 144, then my old 4 track studio, then WSM’s 8 Track Otari. Local callers would dial the same number over and over just to laugh. Newer models allowed none of that, especially these days when everything is internal and no decent way to transfer my telephonic multitrack masterpieces. Some won’t even let get to the phone after, “One ringie dingie!”
Each new model seems worse.
Why does so much new “hi-tech” seem so low?
Consider my amazement when one of these monstrosities managed to capture the following message…

”Hi! Oh this is going to be a blast from the past…”

An old classmate: fellow thespian from way back before comedians weren’t trying to inspire semi-childish laughter by substituting a similar sounding word for “thespian.” But it wasn’t just the reconnect that disconnected my normal wise guy demeanor: the internet provides a plentiful supply of, “Oh, THAT’S where you went!”
No, it was Debbie Dylis. We had both been in the off, off Broadway production of Company, back when original Broadway producers and choreographers were experimenting with placing their shows in very small towns using actors from small colleges. Debbie had called to invite me to act in a reader’s theater production of Spoon River Anthology at Mohawk Valley Community College. My disconnect might be summarized by what I said to my wife Millie, who I met at MVCC, after the call…

”You mean someone actually remembers me?”

Going back to my first autumn day at MVCC, in 1972, underneath it all I was a homesick Central Adirondack boy constantly questioning what kind of quicksand I had just stepped into. In the two years that followed there were plenty of low moments, some terrible. Yet despite the bad it was well worth the adventure.
I think most of the alumni who performed that Saturday felt the same way. Many of us came from a long distance to be there.
I played the Village Atheist. I have never been an atheist, but I must admit I have some things in common with both atheists and believers. The Village Atheist in me would never have imagined all the beauty that was yet to be in 1972. If the believer in me had known all I had to go through to be the me I am today I might have become an atheist.
As I shared the stage that night, we reached out into the darkness after ‘God’ called each of the characters we played to face judgment. I realized we shared a common bond both in the past and at that moment: creating something together bigger than each individual.
We are all performers, in a sense. It takes belief to stand on life’s stage and become more, to help others to do the same. If we’re lucky great transformations happen, a delightful metamorphosis. That’s both between ‘performers’ and ‘audience.’ The times we are unlucky are more Kafka like: times that… bug… us all.
Should I Kafka, Kafka after that rather bad literary pun?
Just a few of the ‘stages’ my friends performed on after leaving MVCC…
It takes faith and skepticism to become a great bricklayer.
It takes faith and skepticism to raise a child damaged by a quack.
It takes faith and skepticism to work in Communications after so many years on stage facing so much applause.
It takes faith and skepticism when a fine mind suddenly has an unexpected medical emergency and then bravely fights her way back.
And it takes faith and skepticism to barely make a living touring over 30 years with your own productions for kids, then have physical problems snatch that away.
Life and aging offer so many pratfalls.
Each and everyone of us traveled to be there that night: from afar, from as across the street. We have traveled afar to be where we are now. Living itself is an achievement.  We all create ripples in time. Some big. Some small. Too many envy the biggest ripples; forgetting big ripples often shred lives like raging storms shred seaside towns, make lives go Titanic. The biggest ripples may end up more myth than truth. If Jesus were to return today he might echo the cry of T.S. Elliot’s Prufrock… 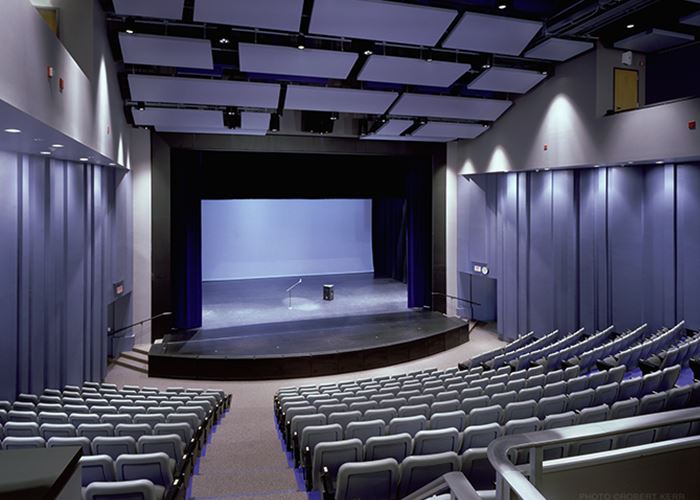 Newer stage at MVCC. The old stage for Company was in the administration building.