October, 2020- In another surprise move President Trump signed an order this week that vacated all voter registrations

in all states, changing all their voting rules, creating only one class of voter. Critics claim this is a severe modification of his stance that illegal immigrants shouldn’t be in the country and are voting in the millions.
Addressing reporters from FOX, OAN, Newsmax, RT and Breitbart; among other right wing news-based internet sites, President Trump announced that only COVID and other viruses could vote.

President Trump went on to say that reparations needed to be made, although he fumbled with the word some.

”The extreme far left wants rap-a-rations for people who vote for them. TERRIBLE. SOCIALISM. Why should rappers get special rap-a-rations? If anything should get special rations it should be viruses. They have been in this country forever, even before the Injuns canoed here from Chi-nahhhhhhhhhhhh and tried to kick REAL Americans out. Let’s welcome our newest citizens. I am granting COVID and these viruses citizenship. Some are good viruses! To make up for the past only viruses will get to vote in November.”

When asked how they were going to vote he responded…

”What a horrible question. You should be ashamed of yourself.”

After the president spoke the president’s spokeswoman shuffled out wearing very little, whip marks on her body, wrists and ankles tied, a ball in her mouth, small microphone in the ball so her muffled words could be heard. When asked how a virus could vote she said the president would vote for each one in one big, wonderful, ‘perfect’ vote.
Only FOX, OAN, Newsmax, RT and Breitbart, and other extreme right wing organizations are now allowed to attend presidential briefings. Mandated by a previous signing statement they must be robotic representatives; designed by newly renamed Ivanka Trump Robotics. Also, as per previous presidential signing statement, ITR will be supplying all voting machines nationwide for 2022 and beyond.
Unfortunately, during the press briefing, several of the robots had to be carried out because they broke down. ITR said their hypocrisy setting needed to be elevated to infinity and beyond.
This reporter reached the company’s head spokesman who holds the official company title ‘Ivanka’s head gigolo.’ The spokesman was asked if elections would be safe and secure with these new machines. The spokesgigolo only repeated the President’s previous response. 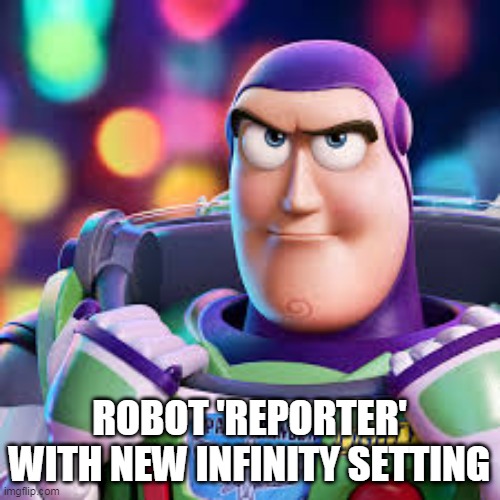