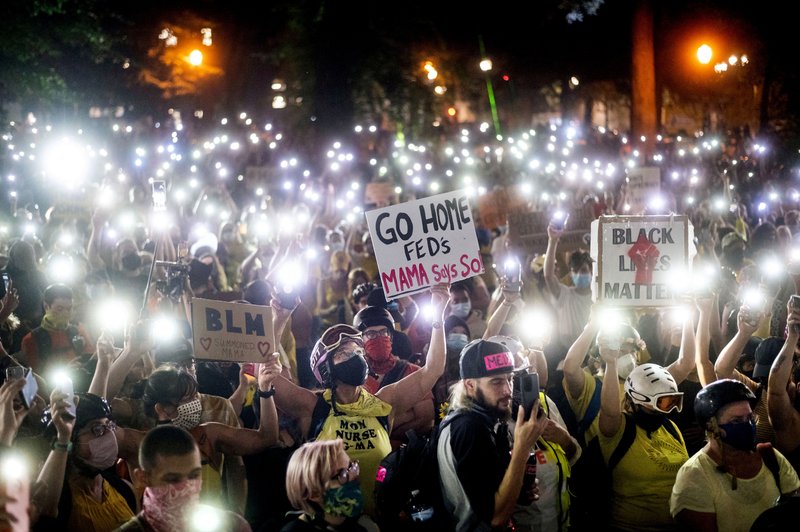 Posted by a resident of Portland, OR, shared by Carl Baker

While I’ve been sort of following the ongoing events in Portland, I was floored by the information I recently received from my father-in-law, Alden Roberts. It is incredibly important that people know what is happening in Portland, because it is very scary and has very real implications for our entire country.

By way of context, Alden is a general surgeon, retired as the Chief Medical Officer of a hospital in Vancouver, Washington, and just finished his term as the Chairman of the Washington Medical Commission (the state agency that licenses and oversees all doctors in the state). I share this information to emphasize that he is a community leader, a very smart, educated, and informed person, and is not one to exaggerate or spread misinformation.

Here’s what he has observed in Portland over the past few days:

“1. The protests are confined to a 2 block radius around the courthouse, and if you’re 4 blocks away, you can’t tell anything has been happening. There is nothing going on outside of that region, and Portland is functioning as normally as the Pandemic will allow. It is not burning, nor is it out of control.

2. The protesters are absolutely peaceful at the Protests that I have been part of, and with the exception of graffiti, are completely within their constitutional rights to protest. The protests involve singing, chanting, and have used “white walls” to block whites who are trying to disrupt or corrupt the protests. Yes, cursing is rather commonplace. More than ½ of the protesters are white. All are protesting for Black Lives Matter, although the entrance of the federal paramilitary force has brought out a lot of people, including myself, who are incensed at the use of unregulated federal force against law abiding citizen and against the will of the state and local governments.

3. ALL of the protesters are wearing masks to minimize transmission of CoV-2. However, as at times there are 1000 or more of us, it is hard (though not impossible) to maintain social distancing. When the federal paramilitary force is deployed, it becomes impossible.

4. The Police responded unprovoked and were brutal, but nothing like the paramilitary force. There is a court order that forbids the police to use teargas. I was not there when it was just the police.

5. At the protests I have attended, I did not witness any unlawfulness on the part of the protesters. Each time, the federal paramilitary personnel launched an apparently unprovoked attack. There have been no “riots.” The federal paramilitary force has had no training in crowd control, has no oversight, was not invited to Portland by local leadership, does not have any form of identification do not wear name badges, and wears military camo. They are heavily armed with flash-bang grenades, less-lethal bullets, pepper bullets, pepper spray and tear gas. They will pull goggles off of protesters and spray pepper spray into their eyes. They used a baton to beat a US Navy vet, broke his hand and sprayed pepper spray in his eyes because he asked why they weren’t honoring their vow to protect the constitution. During the assault, he stood still and did not resist until blinded by the pepper spray, he turned around and walked away. The “line of mothers” on Sunday was gassed and shot with less-lethal bullets for chanting Black Lives Matter. At least one was pregnant. A protester holding a sign up with both hands was shot in the head with a “non-lethal” bullet and will likely have permanent brain damage. While I have not personally seen this, there are videos of people being kidnapped into unmarked vans by the federal paramilitaries as they left the protests, held for a couple of days, interrogated, then released without charges or explanation. At this time, re-read my first two points. The protests are no threat to Portland and only encompass a 2 block area. They have been peaceful, with graffiti as the only illegal activity. They are well controlled and supported by a cross section of Portlanders. There is no reason for the federal government to be involved, and the excessive force being used appears to be nothing more than a political show of force against US Citizens by the Trump administration.

6. About 3000 protesters showed up last night (July 21); all with masks, very well behaved. Certainly no chaos, no violence on the part of the protesters. I left at 10:30, the paramilitary attacked at 12:30. I spent an hour talking to the medics. They say they are being targeted by the paramilitary personnel. They are often the first to be shot at and tear gassed. When they try to help an injured protester, the paramilitary personnel throw flash-bangs and tear gas at them (they carry gas masks). One of them was beaten, dragged away from the injurekd person they were treating and arrested. They are from OHSU as well as Portland Fire.

7. The Elk statue was taken down by the Police to “protect” it, but the Elk statue was a favorite of the protesters because it was uncontroversial; so they got a blow-up elk and put it where the real statue used to stand. It’s sort of a rallying point.”

This should concern, if not terrify, all of us. This is an unidentified and unaccountable federal police presence attacking American citizens who are not violating any federal laws. This is literally how the “secret police” in other authoritarian regimes began. The comparison to the early stages of Nazi Germany is NOT AN EXAGGERATION anymore.
Silence is complacency. Please share this post. Please spread this information. Please get involved. Do not allow or condone this conduct by our federal government. I don’t care which political party you support, this is an affront to the U.S. Constitution and the founding principals of our nation.