Inspection- The MOST Important Book of 2020 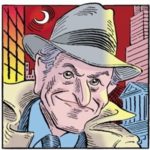 take into consideration placebo ballots. Some dare call the “provisional.” Polls can’t take into consideration closing and limiting voter stations, voter access, or machines with proprietary software, tricks used to purge the politically convenient to purge purge-able, or interference; wherever it may come from.
Counting the votes matters little to not at all when your opposition keeps gleefully punching more and more holes in your vote holding bucket.
OK, I admit it. I included some things in my “polls can’t take into consideration…” rant; things not covered much, if at all, by Greg Palast in his latest. I got carried away, maybe like your vote will be. Killing the right to vote has become such a ‘fabulous,’ diverse and outright evil industry it’s hard to know when to stop ranting. And you wouldn’t believe who is among the many bad actors who are gleefully enabling this. Who? Well, just to provide one: public broadcasting consumers might want to hold their noses and go, “PEW!!!” But I’ll save that seemingly innocent organization skunk spray story, and others, for when you read the book. Besides, Greg tells it better.
If you buy another, or any, book, or download one onto your Kindle, phone or Nook, you REALLY need to get Greg Palast’s How Trump Stole 2020. Greg has been investigating election fraud tactics for a long time. He reports for the BBC because the MSM seems to have little interest in the topic. Hey, in the case of PBS, NPR, wouldn’t you be disinterested when partially funded by same said stinky organization?
Greg has also been involved in harassing characters like Kemp in Georgia who ran his own election while gleefully purging those who tend not to vote his way, closing down their polling stations, hell, you know the list. His new and worse version of Crosscheck, called Exact Match, had the names of voters entered right by said voters ‘mysteriously’ reentered wrong. By his office? A trained, but blind, possum? Inquiring minds will probably NEVER know. Why, I can hear the Exact Match software sing the revised Styx song Come Sail Away in my head right now, “Come purge away. Come purge away…” Funny how it’s mostly the names of politically inconvenient voters. The period after the middle initial now missing that the voter did put there? Bye, bye!
Confusing cards sent to voters. (Maybe sent, sometimes not; but purge anyway.) The instructions on how to fold, spindle and mutilate alone pretty much guarantee a permanent visit to Trashthevoteland.
Generally I agree with Greg, but we have disagreed a few times. Example: mail in votes. Yes, there have been problems. And there haven’t been with all the other forms of voting? Well, except MAYBE in person, black box, electronic only voting because 99.9999999999999999% of the time we never know: proprietary software. I’ll give you just one of the many hints; an all too common occurrence: flipped votes. Even Republican flipped to Dem, though the other being far, far, far, far, far, far, FAR more common.
Did I go “far” enough in using enough ‘fars’ in that sentence? Probably not.
Oh, but some of us DO get a receipt these days. See? THAT is indeed who I voted for! Put it back in the machine and, like pulling the arm on a bad one armed bandit in Vegas, around and around your vote goes, on which candidate does it stop, if any? The politically connected software designer may only know.
So now it’s getting closer and closer to the ever razor sharp finishing wire: the November election. Which candidate is it all pre-designed to cut the legs off from under? I think we already know. But, hey, we still have time to work on mail in, if not all the systems. Make it better. Make them better. Especially with strong national standards we’d get from strong, ethical, leadership.
Will we?
I think we already know that too.
Hey, political inconvenience is like the worst forms of COVID for the very vulnerable.
Which brings us back to how our right to vote is being stolen when politically convenient, and back to Greg Palast’s new book.
What’s great about Greg is he is very entertaining too. As an investigative journalist he combines wit, cartoons, a tongue in cheek tude, while not dressing out his writing with a lot of complex, technical, references. His writing is very accessible. On tough topics even more attention limited readers should get it. He doesn’t go off on tangents like you know who.
Yeah, I have had a lot of training as a journalist too. But I admit: as a columnist for so many years I do tend to dive down in the weeds; especially when something tickles my funny.
Greg is better than that.
The Trump presidency STARTED via election fraud tactics. It’s no coincidence that two College only victories in very close to close to a blow for the non-trump side have ended up favoring Trump’s party instead. Want to end the far madder madness that is the Trump residency? Get to know more about the history of massive election fraud on multiple fronts in multiple states? Want Trump to lose in November? Heed the warnings. Pay attention to advice about what you can do. Get Greg Palast’s book How Trump Stole 2020, before the title becomes all too prophetic.