Inspection- These Are NOT “Good Guys with Guns”

Posted on February 9, 2021 by Ken Carman Leave a comment 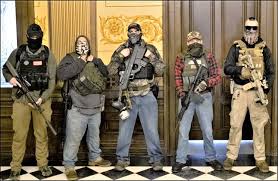 As a gun owner I write to chide some gun owners, some who claim to be defending gun owner’s rights. Not because I want more gun regulations. Not because I want confiscation. Not to push gun registration. I doubt enforcing or even passing gun laws like what some want would be all that feasible in America. In a country with a long history of gun ownership and resistance to gun laws? I am beyond skeptical.

So that is not what this is about. It’s about how something is desperately wrong with some of the gun community. Something has changed from when I was young. Something deeply wrong, even sick. And that’s all too obvious.
There have been words said, there have been acts, there has been behaviors that any decent gun owner should be the first to condemn, the first to rise up in fury, the first to agree we must hold to account irresponsible gun owners. When an armed lynch mob attacks; cheering on putting a bullet in public servant’s head, no responsible gun owner should support that: no matter how much they disagree with that politician. They certainly shouldn’t just very briefly condemn a terrorist lynch mob using with just a few measly, weaselly words when not doing so has become politically in convenient… then try to redirect that blame on those being attacked, abused, killed. Even if these “others” have done inexcusable things. What others do never excuses bad behavior. Gun owners should be the first to join those who insist this stops here and they all be arrested, held to account.
Sure as hell not cheer them, make excuses.
There’s an illness in the gun community that has been spreading for years. The NRA’s course I took in the 60’s emphasized RESPONSIBLE gun ownership. What has happened to the NRA? Seems to have become nothing more than a political arm of the radical right, rather than an actual advocate for legal, yet responsible, gun ownership.
Yes, I once was a member, and ordered at least one gun by mail, when it was legal. I was a hunter. I still love antique arms. I understand getting that one deer a year, minimizing any suffering, having respect and compassion for the life we take. I understand true hunting and a passion for weaponry.
Maybe it was Trayvon’s death that made me even more aware how off base much of the gun community is, how far it has strayed. No matter how much one might be able to defend legality of one’s actions when your Neighborhood Watch clearly states in its guidelines you are not to bring a gun you don’t bring a gun. You are told by your Watch not to get out of your vehicle you don’t get out of your vehicle. When you are told you are just to observe and wait for the police, you observe and wait for the police. When you are told not to pursue you don’t pursue. You certainly don’t stalk a black teen, not identify yourself. If you truly believe in stand your ground that teen you pursue, you stalk, would understandably stand their ground. While Trayvon’s past had some questionable incident: a past at the time NOT known by the stalker, that does NOT justify all that led up to what happened. And the behavior post Trayvon’s death; for years after, showed he was an irresponsible gun owner. Stopped by a cop and playing with his gun as if he might shoot? What would have happened if he had been black? There’s another incident that gives us an answer.
Zimmerman might just been shot. Maybe in the back if he had been ordered out and tried to bring his gun. Even if he didn’t and the cop claimed he had a knife instead; gun drawn on Mr. Zimmerman. Even if that knife was on the opposite side of the car, never mind the gun he had already been playing with. Maybe if he adjusted his pants and it was claimed he was holding a knife. But even just playing with a gun while talking to law enforcement after being stopped, is THAT responsible gun ownership?
Still he was defended by those who act as if that IS responsible gun ownership.
How about claiming a gun was seen at a gas station, killing one person in the car: no gun ever found except the shooter, then that shooter shooting at the fleeing car?
There are so many incidents where gun rights advocates should be the FIRST to condemn, but so many don’t. They go straight to defending the actions of, the behavior of, irresponsible gun owners.
What is the mantra I remember from my days as a William F. Buckley Conservative? Oh, yeah, variations on…


“People should be held responsible for their actions.”

Gun owners, gun rights advocates, need to be the first to hold people responsible, even when it’s not politically convenient. But that was more the history of both the true Conservative movement started by Buckleys. And the history of guns right advocates, old time NRA members, like I once was. That’s even if we have a suspicion, or even a belief, there’s some “conspiracy.” Even when we are angry about how things are going.
Thinking there’s some conspiracy, thinking power was taken from you unjustly: NEVER excuses things like this. If that were to be the standard then certainly gun owners who thought 2000, 2004, 2016 would have brought out crowds doing what happened on January 6th. Would have had the ‘wronged’ candidate would have cheered on those who facilitated assault and murder.
Certainly anyone has a right to challenge the results of any election, to some extent. Certainly anyone can believe there was a conspiracy, or what happened was caused by an unfortunate set of circumstances. Certainly anyone has the right to verbally challenge, or write a challenge to, some of my assertions here. But can we at least agree that we should be pushing for RESPONSIBLE gun ownership? If we truly believe in responsible gun ownership can we LET’S AT LEAST ACT LIKE IT?.