With Trump’s acquittal, the U.S. becomes a failed state 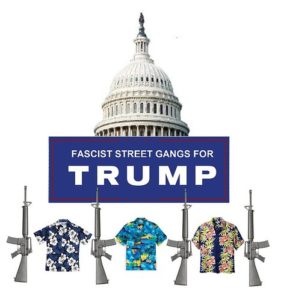 The Senate of the United States has just refused to hold former President Trump responsible for inciting an insurrectionary mob to attack Congress even though he did so in full view of television cameras. In an ominous victory for authoritarianism, the legislative branch has willingly submitted to a violent assault by the executive branch.

As he campaigned for re-election, Trump constantly warned that the election would be a fraud, as in this July 30 tweet: “2020 will be the most INACCURATE & FRAUDULENT Election in history.” On Aug. 18, 2020, Trump told a rally in Oshkosh, Wisconsin that “the only way we’re going to lose this election is if the election is rigged.” Trump made it perfectly clear that he would not accept an election loss, thereby rejecting the very idea of democracy. If he were expecting to win the vote, all his talk about fraud and rigging would be fouling his own nest. But he expected to lose. He was not campaigning to win the vote, but instead to get his base to believe that Biden’s winning vote count would be rigged.

In case we had missed the point of his campaign rants, between Election Day on Nov. 3 and the Capitol riot on Jan. 6 Trump “lied that the election was rigged at least 68 times and that it was stolen or in the process of being stolen at least 35 times. He made claims of voter fraud and ballot-counting irregularities more than 250 times” (Huffpost 2/8). He repeatedly said he had won in a “landslide.”

On Dec. 19 Trump tweeted: “Big protest in D.C. on January 6th. Be there, will be wild!” And wild it was. Early in the Senate impeachment trial (Feb. 8-9), the House presenters showed video of Trump haranguing thousands of his supporters whom he had invited to gather near the White House on Jan. 6. He began by reminding them that “All of us here today do not want to see our election victory stolen by emboldened radical-left Democrats, which is what they’re doing.” He urged them to march to the Capitol to “stop the steal.”