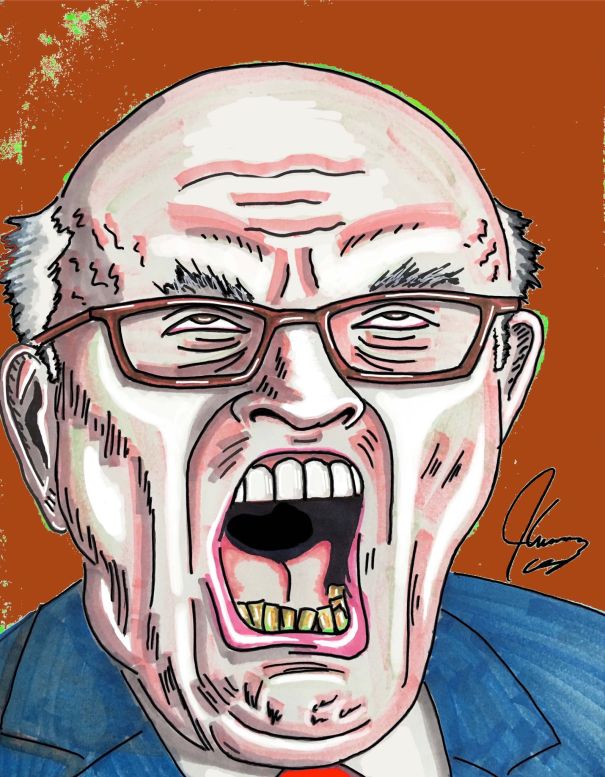 I heard it so many times I finally sat down and started typing this. The morning I started typing MSBNC was on in the living room, with a go back to the local NBC affiliate. NPR on in the bedroom for the same reason NBC was on go back: to catch weather, traffic. All of which ended up with the same story told three times. Giuliani: the “hard charging prosecutor,” America’s mayor after 9/11. Then the Trump supporting sleazy.

What happened to this person between being framed as some “great man” that magically transformed him into a scuzzy suck up to a criminal and his crime-based presidency? Why skip the period between prosecutor and 9/11? Well, maybe because Giuliani has ALWAYS been worse than sleazy?
Millie and I are originally from upstate New York State. Despite moving to Tennessee in the late 70’s we have kept our contacts, and own retirement property. Plus when I was quite young I didn’t live upstate yet. I lived near New York City.
No, Giuliani was the opposite of a saint between prosecutor and 9/11 And no saint as a prosecutor. He was just showing his true colors to all of us during Trump.
”Sleazy?” Let’s start here. How about bringing his then girlfriend home to live in the mansion with his wife and kids? Insisted the office responsible for security be placed in the towers, even though advisors recommended that office be placed elsewhere. Great little love nest, Rudy! Towers that had had a previous attempt. A previous attempt where we were warned they’d be back. Rudy knew that. I guess bonking her there was more important than the safety concerns regarding the towers.
Just like it was more important to bring his girlfriend home to live with his kids and wife. In 99 Giuliani charged the costs for his NYPD security detail to obscure city agencies to hush up his relationship with Judith Nathan.
Here in Nashville we lost our own Democratic Party mayor for a situation no where near as sleazy as Rudy’s long list of adulterous sleaze. Our mayor was having a relationship with her security guy. The scandal erupted when HE submitted time cards that included their time together.. in the sense they shouldn’t have been together. Her name is one no longer spoken.
But Giuliani? His name is on more lips than lips have been on… and that’s saying quite a bit. Add to Giuliani’s list having the NYPD provide transportation back and forth for a scandalous love interest; one assumes to bonking sessions. The right and media behave as if, “So what?” Or not mention it at all.
Oh, but regardless of being hated when Rudy went down and gave a few good speeches, and showed a little politically convenient concern on 9/11, good will returned. Aided by the fact Bush should have started with, not running away at first.
But look this ain’t all about sex. Ask blacks about their experience under Giuliani.
I will give you this: Times Square was a cesspool. Lots of strip joints and sex business-based shops I quickly walked by in my early teens went away. He had it cleaned up. HOW he cleaned things up is another matter. If you’re going to “remove” the homeless one should consider where they should go. I have seen the results of doing that without such concern.
And what about his cred for dropping crime rates? Maybe not so much because the crime rates were already dropping? Because Dinkins added 7,000 officers? No, actually his cred was built on harassing those with small amounts of pot, squeegee-ing. When such is based on cruelty there’s always blowback, eventually. The neat things for jackasses is usually the blowback builds… then really hits the turbo fan once they have tiptoed away, or stomped away.
Rudy is not much for tiptoeing, just like his current deity. Hey, Rudy, did you stop with the holy water and start doing the cross with Trump urine before you genuflect to the Orange one?
Constant harassment, shake downs… if he had been ordering officers to stand outside Grand Central and the Postum building and stopping every person out every day no matter what color or age maybe the white nationalist right might not have been so supportive? (“Broken windows?” Stay tuned to this column, I’m getting to that.)
All this was before Trump made being a bully and an a-hole as politically correct as it is today: attracting the kind of elements willing to beat cops to death while claiming blue lives matter. The kind that would love to have Trump as America’s oligarchic-ical, perpetual, Putin-like tyrant. Giuliani is the kind of flying cockroach of a politician who would be attracted to bug zapper Trump. Yes, Rick, everything Trump touches dies.
No, don’t count me to ever be any Rudy fan. He was hated long before he became the long winded crap spew-er he is now.