Inspection- TV Shows that Died Before Their Time 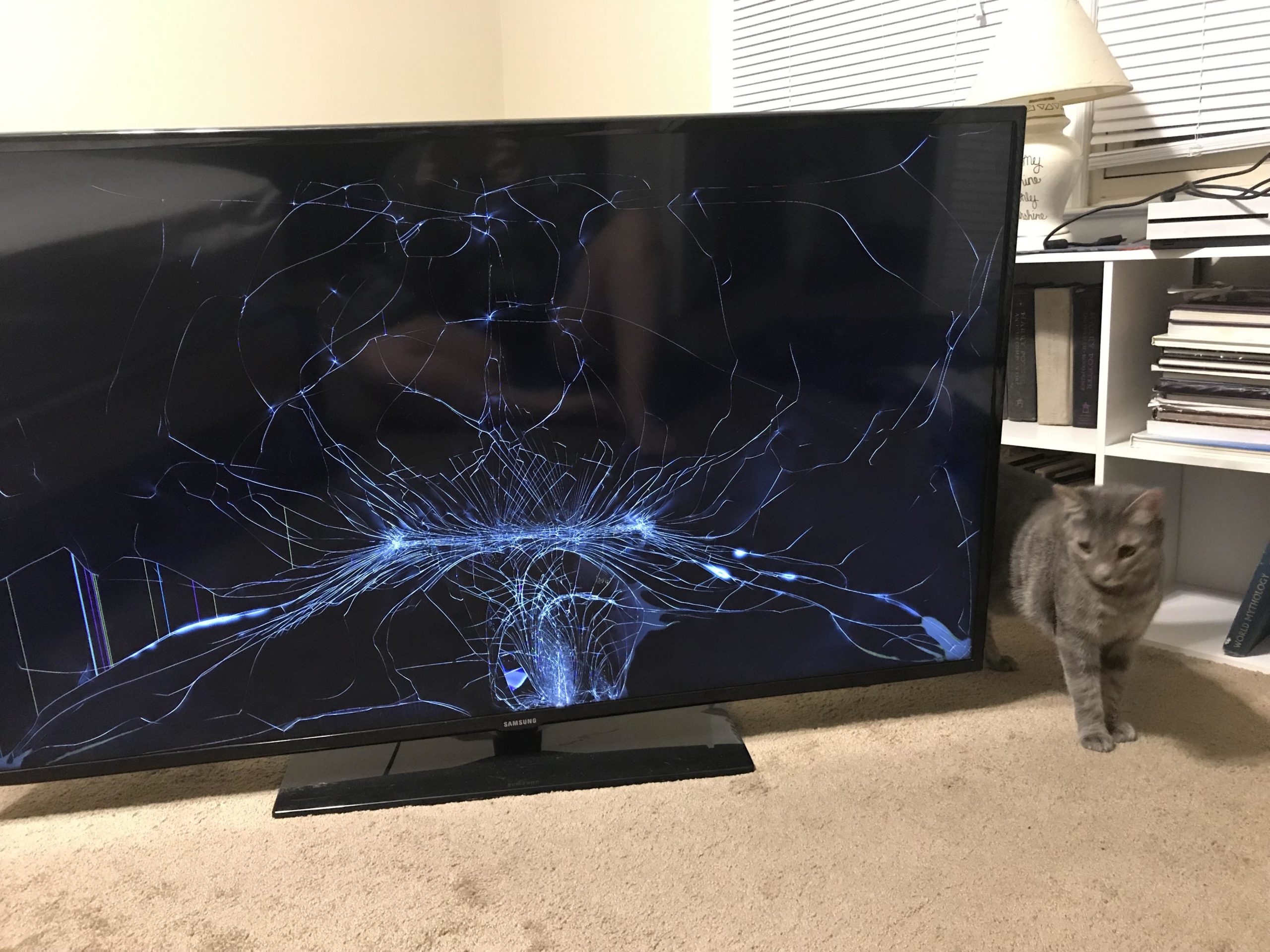 Something I love to do from time to time: take a break from politics and social commentary. Except one example, I suppose. And that one I come down on two people who, while I loved their humor, were the cause of why their show’s run ended far too soon.
This is my own personal list. Very short. I’m sure there are more, these are just 6 I can think of at this moment. Some because I started watching DVDs I just bought and forgot how bloody good that program was. PLEASE offer your own suggestions on Facebook, or the sites where this is published that accept comments.
Anyway, here are 6. I’m sure if I rummaged around in my ever cluttered head longer there would be more… 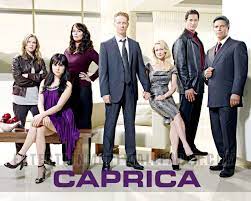 If you adored the reboot of Battlestar Galactica then Caprica should have been a hit. Problem is, as a prequel, they really needed to get into how this reality came into being That dragged the show down for some looking for more tension, more action. Yet the web they weaved, to me, was intoxicating. The fight between monotheists and other theists in a modern: far more polytheist, society was well worth the trip for me. I have always enjoyed examining religion. And Caprica definitely helped us examine our assumptions about religion, how it serves humanity, and how it can led to our ultimate destruction. Some assume religion led to all our advancements: socially and scientifically. Caprica offers that AND the darker vision. A broken, yet brilliant, family that led the way to developing an android servant class finds that servant class turns against us. Why? Religion. Religion repressed and scorned, as it so often does, leads to violence. Whatever the dominant religion is those seeking to become are assumed to be to blame, and sometimes they are. No matter what religion.
Then you have the very personal complication: polytheist, loving yet flawed mother and a brilliant father v. their equally brilliant monotheist daughter caught up in what she didn’t realize was a violent cult. Her friend using the androids for revenge. Yes, Caprica was complicated. I believe it had to be. For me that was a good thing, but apparently not so much for ratings. 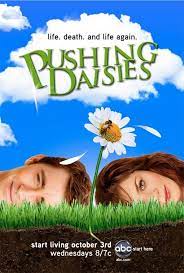 Told by the narrator in an almost Seuss-ian way, complete with colors one would expect in a more adult Seuss tale, this show never quite took itself seriously. Yet the scripting was amazing, relevant, insightful. Probably one of the lightest shows that dealt with death: boy born with the power to raise the dead, but if they stay alive someone else must die. If they ever touch again, to quote Beetlejuice, “Dead, dead, deadski.” Unrequited love? Of course that’s part of the mix in a bigly way.
He raises his childhood love from the dead, the catch is they can’t touch or she dies. The immense love between the two is obvious. Proof love is more powerful than touch, and sometimes the most personal interactions just complicate the whole affair.
This had to be a hard acting job for all, but they did it perfectly. And, as an added plus, Kristin Chenoweth’s character (Olive) loves him too. She also gets to sing. It could only have been better if Idina Menzel had joined her from time to time. A missed opportunity probably caused by the show being cut short too soon, kind of like the lives of some of the people the piemaker revives. 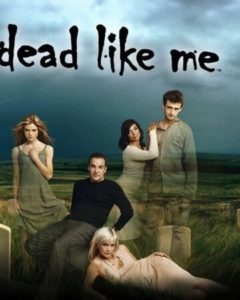 Dare I repeat myself? “I do, I do!”
How am I repeating myself you may wonder? “The scripting was amazing, relevant, insightful.”
George has a problem. George was hit by a celestial object. To be more exacting: a toilet seat from the breakup of a Russian space endeavor. George died. Dead George, your cynical, background, doesn’t want to do anything, everything is too much of an effort, teen became a grim reaper. Her unpaid job: take the souls from the soon to be dearly departed before they go bye bye. She doesn’t look like herself to others anymore, yet is drawn to those she left behind.
She has to get a paying job too, and manages to get a job where she is fawned over by Delores: an emotion wreck of a woman who specializes in phony, smarmy, interactions. George leaves for another job but that job is even worse than Happy Time, a temp agency. She tries to come back and Delores refuses to hire her. It’s a whole episode where suddenly Delores is obsessing about her cat, they both head off to the vet. George helps Delores through it all. Funny!
George is part of a team of reapers led by Rube who deadpans his way to being part father figure, part inconsiderate jerk. Rube is unable to see better ways to do things until stuffed, shoved and not quite literally kicked into changing his ways.
A great program that also took a less than serious; yet insightful, relevant, look at death. Kind of like a Six Foot Under with more comedy.
So many death-based shows. Was there something in the air inhaled during this time by both producers and writers? Maybe formaldehyde? 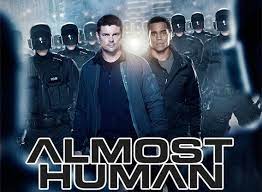 Karl Urban before the new Trek has a very conflicted relationship with his android police partner. You get to see the close relationship between a supposedly defective android and a conflicted detective. Sound familiar? Well, better than I, Robot, not to pick on Asimov who wrote a fine book. Only because, while a good movie, I, Robot was a one off. This had promise to take the premise and flesh it out… somewhat literally and very figuratively. I longed to see the relationship develop even more. Too good to end abruptly in one season. 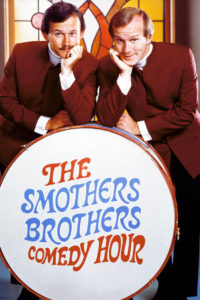 They brought them back, but it was never the same. If they had stayed on at their height: wow. Can’t quite blame the network: the Brothers had a habit of poking the network. In a time of sensitivity to racism that only compares in recent history to today they had a skit where a black man was marrying a white woman and the preacher marrying them had a noose around the black man’s neck, shotgun pointed at his head.
One skit I’ll never forget was a Mason Williams song about the guy who had to dance the waltz by himself because he was a perfectionist. Then he met a 3 legged woman. They actually had fashioned a third leg for her to dance with that didn’t quite work right, which only added to the humor.
Oh, the music! The skits! Mason Williams and John Hartford, the last who also did The Glen Campbell Goodtime Hour, were worth the whole show minus everything else. Great guests and perfect timing. What a great gathering of talent, many who unfortunately faded after.
The only thing I remember about the sequel was a spoof on the plastic nature of Lawrence Welk that didn’t quite work.
Jim Yester, of the great band The Association, in an interview I listened to recently, said this was probably one of the most fun shows the group ever worked on. The Brothers would include them in the writing, designing the skits, and inspired them to add more humor to their introductions between songs. 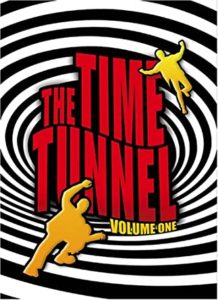 This is sort of a cheat because they did try to bring it back, without success as far as I know. If I had known it was on I would have watched it. The first version suffered from what lot of Irwin Allen productions suffered from: cheesy scripts, cheesy aliens, cheesy attempts at time travel where, for some odd reason, almost everyone spoke perfect 1960’s, American-ized, English. The acting was “OK,” as far as acting went at the time. Reminds me of how TV was once considered lowbrow in entertainment circles, and therefore often didn’t attract the better writers.
I would love it if the producers of the revised version of Battlestar could get their hands on the property. Or Resident Alien. A collaboration would be interesting offering the best of scripting and unique humor. This could be the Sliders of our time, only better scripting. Towards the end of Sliders the show deserved not one more season, however the concept was so good maybe someone with as much talent as Battlestar and Resident will do that too.
Time Tunnel deserved far more attention than it got. It deserved better scripts. It deserved better effects. The tunnel deserved more. They must have wasted most of the effects budget on cheap explosions. And what a delicious fountain of historical education it could have been all wrapped in entertainment. You knew the writers had lost interest when they kept throwing in aliens wearing horrific costumes. It’s almost as if they wanted to kill it.
———————————————————————————————————————————————

Highly controversial? Sure. You may disagree with my choices. I’m sure you have yours. There are some I would NEVER bring back that I loved. I loved Continuum‘s first season. But they ruined it the second time by deciding one interesting character wasn’t enough. You had to have 2-3 more of each character to muck it all up into one big confusing ball of who gives an ounce of pigeon squat anymore? How do you resurrect something so completely botched?
Now we’ve come to the end of what I admit is my short list, it’s conspiracy theory time!
Some of my favorite shows were murdered, IMO. I think sometimes networks intentionally kill TV shows when the execs haven’t the heart to take the guff if they just raised their most obscene fingers at their audience. They did this with Star Trek where, after the audience pestered them not to 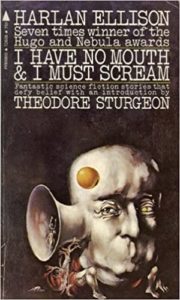 cancel it, they gave it a horrible time slot at the time (Fridays), pissed off Roddenberry, chased him away and most of the good writers. Many causes: terrible budget, a lack of respect. The show had developed a rep for butchering writer’s scripts: some of that fair, some not. Just ask Harlan Ellison’s ghost, wherever he may be. No longer with his ever talkative mouth and his ability to scream holy hell.
Some of these suffered from a lack of true seasons. Used to be a season started sometime in September, break over Christmas time, then on until about May. Now sometimes they go 5 or so episodes then stop. Some dare call that a “season.” Some of those wait a year or more to start up again after we’ve forgotten and moved on. That, IMO, is an intentional program killer, or just stupid programming.
Finally, a warning. If they are doing this to Resident Alien I swear I’ll sic Harlan Ellison’s ghost on them. Only he’ll eat more than their ruddy office plants. Harlan’s idea of heaven may be coming back to take revenge like what Vic and his dog Blood did in A Boy and His Dog. After that there won’t be enough of them left to be cann-i-bal.