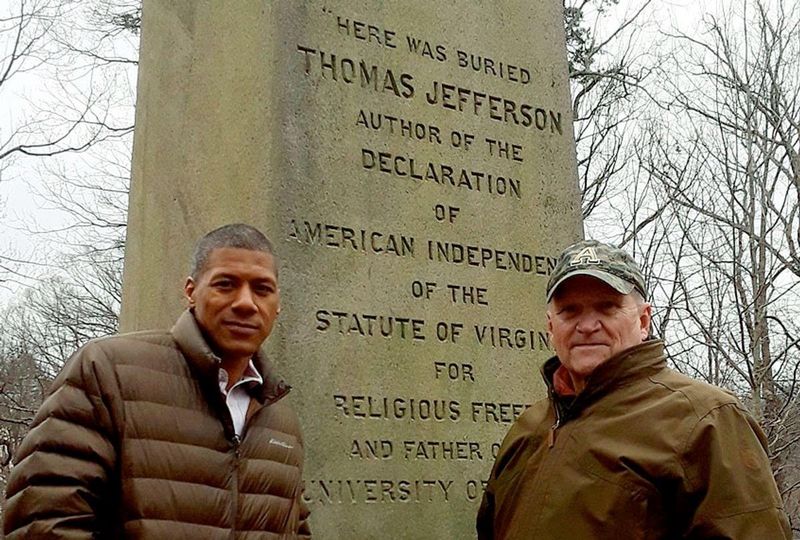 “You are looking at a photograph of me and my cousin Shannon Lanier. It’s a photograph that illustrates why the 1619 Project is such a white supremacist’s nightmare, teaching that racism and slavery played a major role in the founding of this nation. It’s a photograph of the truth exposed, at least in part, by critical race theory, an academic discipline that teaches the same thing. It is not only a photograph, it is a fact. It is history staring you in the face, history in flesh and blood, history that cannot be rewritten, cannot be buried, cannot be denied, because we are alive to tell it.
That’s Thomas Jefferson’s grave we’re standing on. We are 6th great grandsons of Thomas Jefferson, the nation’s third president long idolized as a founding father of the United States. Shannon is descended from Jefferson’s 36 year relationship – if relations between an enslaved person and a slave owner can be called that – with Sally Hemings, who is his 6th great grandmother. I am descended from Jefferson’s relationship with his wife Martha, who is my 6th great grandmother. Shannon’s great grandmother was enslaved by my 6th great grandfather. We are tied together not only by blood but by the stain of slavery on our family and our country. We are cousins, and we are also blood brothers. We carry in our souls the legacy of the slavery that brought our great grandparents together. We are descendants of slavery. It lives within us.

In that way, we are like tens of millions of other Americans who also carry the legacy of slavery within them, as descendants of slaves and slave owners. It’s a legacy that has long been put away and hidden, living only in the shadows. Shannon and I helped bring it into the light 22 years ago when I invited several dozen of my cousins in the Sally Hemings family to be my guests at the annual family reunion of the white descendants of Jefferson who belong to the Monticello Association. We attended the annual cocktail party on the west lawn of Monticello. We mixed together as we wandered freely through both the public and private spaces of Jefferson’s house. We gave interviews to dozens and dozens of members of the media who were there from all over the world to cover the first time that descendants of a slave had been invited to a social occasion at the home of the man who owned their ancestor – in this case, Sally Hemings.

It was quite a scene. My white cousins in the Monticello Association were not happy. Their cousins from the Sally Hemings side of the family had never been invited to the family reunion before. In fact, the descendants of Sally Hemings were not members of the family association, which identifies itself as descendants of Jefferson. Over the next few years, the Monticello Association would consider whether to invite our cousins to join our membership.

In 2002, the members of the Monticello Association voted against admitting our Hemings cousins as members. The vote was 96 to 6. Five of those voting yes were Truscotts – me and my brother and three sisters.

I have a very strong memory of a confrontation I had with one of the employees at Monticello, a docent who led visitors on tours of the house. He approached me at the reunion red-faced and stopped within a foot of me and said, “You have ruined the whole thing.”
“What have I ruined?” I asked him. “How?”
“You don’t know what you’ve done. You have brought disgrace on a great man. It’s never going to be the same after this.”
The next morning, I appeared with Michelle Cooley, one of my Hemings cousins, on the Today Show. Shannon and Michelle and I gave interviews to television crews from places like Bangkok and Paris and Moscow. And that afternoon, the death threats started. They came by email and by phone at first. Later, they would come in the mail to my home in Los Angeles, more than a hundred them.
One I remember very, very well because somehow this man had gotten my phone number, and he called me in the middle of the night. He threatened me, told me he knew where I was staying in Charlottesville and where I lived in California. When his threats had finally sputtered to a stop, I asked him why, and it led to a conversation that lasted about five minutes. He called me a traitor to my race and several other things involving the “N-word.” I asked him why he felt so strongly the way he did. He told me I was trying to change the way things had always been, that Black people were inferior, that they didn’t deserve to be treated the same way as whites. I asked him if he thought Black people should have the right to vote. He said, of course not. They weren’t real Americans. He said something like, “you don’t know it yet, but one day we’ll get things back to the way they used to be, before n—–s had rights and everything went to hell in this country.”

Today on its front page, the New York Times informs us that the state of Texas is entertaining “a flurry” of laws that would “reframe Texas history lessons and play down references to slavery and anti-Mexican discrimination that are part of the state’s founding.” The states of Idaho, Louisiana, New Hampshire, and Tennessee are all considering bills that would ban teaching about slavery and segregation and ban using the 1619 Project in state school curriculums. One Texas bill would “promote patriotic education” by omitting the introduction of slavery when Texas achieved independence from Mexico in 1836. Another bill would ban exhibits at the Alamo that show major figures in the Texas Revolution were slave owners. Another bill would constrain teachers from discussing how racism determined the legal system in Texas. The bills do not address how to teach about the Texas state constitution which legalized slavery the day it was passed, but “playing down” references to slavery isn’t going to help.

Earlier this week, the University of North Carolina refused tenure to Nikole Hannah-Jones, last year’s recipient of the Pulitzer Prize for commentary for her role in creating the 1619 Project. She had been hired by the university’s Hussman School of Journalism and Media to be Knight Chair in Race and Investigative Journalism, a position which in the past had come with tenure. Stories in the Times, The Hill, the Charlotte Observer and elsewhere attributed the refusal of tenure to “a backlash among conservatives” on the UNC Board of Governors. Ms Hannah-Jones accepted a five year contract as a professor with an “option” for tenure review on completion of the contract.

This kind of stuff has been going on for a long time and it’s not stopping. But it is folly. They can pass all the laws they want, but they’re not going to erase the fact that slaves built Monticello, slaves built the United States Capitol, slaves built the White House, and slaves built practically every capitol building in every southern state, not to mention most of the county courthouses throughout the south. They can ban the 1619 Project from public schools, but they cannot hide from what it says about slavery being a part of the founding of this country.

Look at Shannon Lanier. He knows who he is. No law in Texas or Tennessee or Louisiana or anywhere else can change the fact that when tourists visit Monticello today, they are taken through the room where Shannon’s 6th great grandmother lived and where she gave birth to Madison Hemings, Shannon’s 5th great grandfather, and they are told about Thomas Jefferson’s other children with Sally Hemings, and they are shown the furniture that Sally’s brother John built that Thomas Jefferson designed, and they are told about the lives of Jefferson’s slaves and how they made his life as one of the “founders” possible.

History is alive in us. It flows through Shannon’s and my veins. It is in the DNA of my children and Shannon’s children. History lives in who we are and how we live our lives. They can tell all the lies they want, and they can ban all the books and teaching materials they want, but they can’t ban us. We are the legacy of our nation’s tainted past in flesh and blood, and we are evidence that racism and white supremacy and slavery may be in our past, but we are the future.”
EDIT: if you are moved by this post, please DO visit Lucian K. Truscott IV’s Facebook page and follow him. He’s a good thinker and writer.