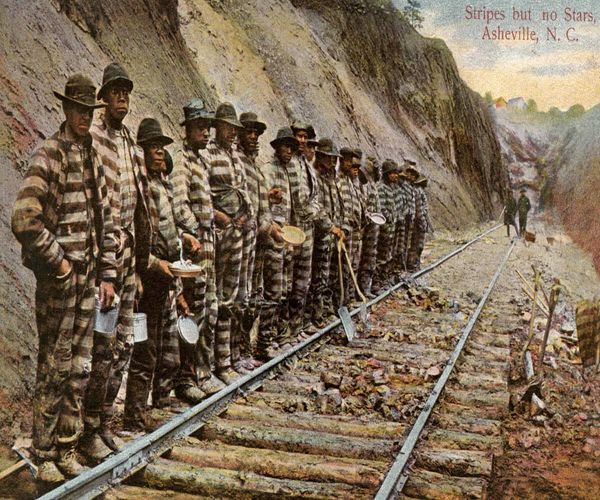 For statement about source please see end of article. The title was chosen by the editors. The Editors suggest readers also research the topic since the original source is unknown. There is plenty of information regarding on the web and elsewhere.

In 1866, one year after the 13 Amendment was ratified (the amendment that ended slavery), Alabama, Texas, Louisiana, Arkansas, Georgia, Mississippi, Florida, Tennessee, and South Carolina began to lease out convicts for labor (peonage). This made the business of arresting Blacks very lucrative, which is why hundreds of White men were hired by these states as police officers. Their primary responsibility was to search out and arrest Blacks who were in violation of Black Codes. Once arrested, these men, women and children would be leased to plantations where they would harvest cotton, tobacco, sugar cane. Or they would be leased to work at coal mines, or railroad companies. The owners of these businesses would pay the state for every prisoner who worked for them; prison labor.

It is believed that after the passing of the 13th Amendment, more than 800,000 Blacks were part of the system of peonage, or re-enslavement through the prison system. Peonage didn’t end until after World War II began, around 1940.

The 13th Amendment declared that “Neither slavery nor involuntary servitude, except as a punishment for crime whereof the party shall have been duly convicted, shall exist within the United States, or any place subject to their jurisdiction.” (Ratified in 1865)

Did you catch that? It says, “neither slavery nor involuntary servitude could occur except as a punishment for a crime.” Lawmakers used this phrase to make petty offenses crimes. When Blacks were found guilty of committing these crimes, they were imprisoned and then leased out to the same businesses that lost slaves after the passing of the 13th Amendment. This system of convict labor is called peonage.

The majority of White Southern farmers and business owners hated the 13th Amendment because it took away slave labor. As a way to appease them, the federal government turned a blind eye when southern states used this clause in the 13th Amendment to establish laws called Black Codes.

In Louisiana, it was illegal for a Black man to preach to Black congregations without special permission in writing from the president of the police. If caught, he could be arrested and fined. If he could not pay the fines, which were unbelievably high, he would be forced to work for an individual, or go to jail or prison where he would work until his debt was paid off. If a Black person did not have a job, he or she could be arrested and imprisoned on the charge of vagrancy or loitering.

This next Black Code will make you cringe. In South Carolina, if the parent of a Black child was considered vagrant, the judicial system allowed the police and/or other government agencies to “apprentice” the child to an “employer”. Males could be held until the age of 21, and females could be held until they were 18. Their owner had the legal right to inflict punishment on the child for disobedience, and to recapture them if they ran away.