Posted on September 27, 2021 by Ken Carman Leave a comment 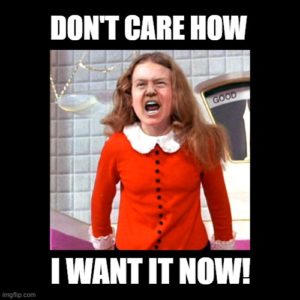 The scene is classic. Take junior to the store. He wants a candy bar. Maybe parents are worried about his teeth, his diet, how spoiled he might be becoming, but the parents gently say no. It will spoil your dinner.

We have candy at home, your older brother will just steal it from you, your ugly fat ass will get bigger… OK I just added the last for fun.
Well, the son starts to have a tantrum, The whole store can hear him. Other patrons have to step out of the way as his wails bust eardrums, shatter squashes and make cashiers double scan things. The customers don’t notice until they’re out of the store, and say to themselves not worth going back in.
The parents just wait for the tantrum to stop. No threats. No nothing.
Junior raises the noise level. Smashes his fist down on cartons of eggs. Pushes over other patrons carts. Runs under the skirts of elderly ladies and pulls them down in front of everyone.
Parents wait for the tantrum to stop. Maybe say nice things. Maybe give in. Maybe promise something else. Still the tantrum continues.
The kid is much of the right, too many Republicans, a lot of MAGAS, those who dare to call themselves “Conservatives,” certainly the terrorists of January 6th.
The parents are liberals, the left, Democrats.
And the right has learned the more of a tantrum they have the more likely they will get what they want, the more people will believe their nonsense, because as ‘adults’ (HA!) why would they make so much noise unless there’s something to it? Problem for them is now they have hitched their tantrum wagon to someone who is REALLY bad at it. And so obvious. Of course there are those who will believe, but there always are. If he could poop out Trump brand feces those folks would happily chow down and claim it Sirloin.
I hate to confirm a parental cliché’, but I think in we are way too permissive. We seem to have more of a nasty wasp sting allergic reaction to even the suggestion we should play hardball. The radical right is so into hardball. They beat cops with flagpoles while claiming to be for the Blue, try to break into a barricaded area to hang their own VP while claiming to be patriots. They frame their worst insurrectionists as political prisoners after dragging cops face down down stairs and beat them again, spray them with highly toxic poisons, plant pipe bombs. All over losing an election.
In 2000, 2004 and 2016 some of us felt cheated, robbed… certainly the reaction was equally violent, right? RIGHT?
Silence.
The tantrums keep getting worse as the media plays both sides nonsense.
This has to stop. We have to become the tough parent with all that entails, be O’Connell and beyond. Punish them in front of everyone. For giving them anything they want feeds the monster.
Maybe we should have kept those gallows; saved them for the worst offenders? At least drag their asses up there and put the rope around their necks. Get them to embarrass themselves in front of the cameras. Raid headquarters for all these groups. Dangle them over cliffs. Parade them in front of the cameras. Tie up their court cases. Keep framing them as far worse traitors to their own country than the Confederates, who at least had the decency to just declare themselves a separate country rather than doing all this.
I understand why these ideas can be revolting to some. But, otherwise, do you see any end to the radical rise of this hyperbolic curve? I don’t.