Better days,: back when Curious George actually basked under the “glorious” picture of Junior’s Mommy at the White House during his maladministration. 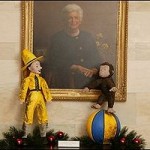 This is a take off an actual book about our adventurous simian.

Curious George went to the museum of Natural History. Apparently he hadn’t heard that God created the whole damn planet in a week, more or less, and then relaxed to have a deity strength doobie. You really should try them. When the blessed Saint Dean entered Heaven he introduced God to this all powerful herb. Ever since then they’ve been doing concerts for the angels singing, “Doobie doobie do….”

Curious George wandered amongst the exhibits. He was really interested in a big dinosaur called Tyrannosaurus Rex, right next to Michael the Savage Weiner Rex and Rex Harrison. So he hid in a bathroom and do what monkeys often do… until closing time. If you don’t know what monkeys “often do,” let’s just say that Curious George was very sore, especially when he tried to do number one, after waiting in the bathroom so long.

Once the museum was closed he climbed aboard Rex and started whooping as the bomb dropped down to the ground….

Sorry. That wasn’t George, but it was a famous movie.

He climbed aboard dino Rex and dino Rex broke. Alarms went off. Homeland Security showed up. They dragged off Curious George to Gitmo where they did far worse unspeakable things to George than George did to himself. By the time they got through with him he had admitted to plotting 9/11, murdering Michael Jackson, causing his sister’s wardrobe “malfunction,” sabotaging BPs well and being Satan himself. Proving once again that Neo Cons know how to protect America and anyone who dares to disagree with them needs to join Curious George.

There, now wasn’t that a nice little story, boys and girls?

Next we’ll read from another Neo Con children’s book: Bessie the Sheep and Lush Dimbulb Get Married Then Go to Neo Con College.
Subtitle: Flock Ewe.