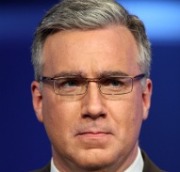 Last night, Friday, January 21, in what I know must have been a surprise to much of his audience, Keith Olbermann announced this was the last “Countdown with Keith Olbermann,” thanked his viewers and those who had helped put the show on the air over the years, and then calmly read a James Thurber story named “The Scotty Who Knew Too Much,” the moral of which was: “It is better to ask some of the questions than to know all the answers.” It was an odd, unsettling moment in the context of Keith’s departure, and it’s still not clear if Olbermann quit or MSNBC fired him; the only official announcement from MSNBC being an exercise in bland Corpospeak opacity:

“MSNBC and Keith Olbermann have ended their contract. The last broadcast of Countdown with Keith Olbermann will be this evening. MSNBC thanks Keith for his integral role in MSNBC’s success and we wish him well in his future endeavors.”

“Olbermann had two years of a four year contract remaining, worth an estimated $30m, and was the network’s highest-rated personality, responsible in large part for MSNBC’s orientation as a liberal, Democratic-leaning channel.”

Although Comcast ferociously denies they had anything to do with this – and it is barely possible Keith simply refused to work for them and ended his contract by mutual agreement with MSNBC — the juxtaposition of FCC approval to take over NBC/Universal and Olbermann’s blink-quick departure reek with the stench of conservative mega-corporation Comcast sending a chilling message to the cable news network’s employees – especially air personalities Rachel Maddow, Ed Schultz and Lawrence O’Donnell – that if they go too ‘progressive’ in their shows, if they pull back the curtain on corporate malfeasance and corruption with too much zeal and fact, they could find their contracts suddenly cancelled as well.

(The new prime-time MSNBC line-up, BTW, is O’Donnell in Keith’s slot at 8:00ET, with Ed Schultz moving into O’Donnell’s current 10:00ET berth. Rachel will stay in her current time slot.)

Thankfully, Keith is still owed $14 million on his contract, so he will have a chance to take a breather, review his options, and make a comeback elsewhere, perhaps even at the struggling third-place CNN. As Rob Soto at Etidbits.com speculates:

“As for our opinion on what’s next for the liberal anchor, don’t be surprised if Olbermann ends up on CNN sooner than later. Their ratings are in the tank, their new Parker/Spitzer series is a disaster (with Kathleen Parker reportedly not very happy being there) and is a poor lead-in to the new Piers Morgan Show. The entire evening lineup needs a makeover, and fast. Olbermann reportedly still has two years on his contract and will get paid his annual salary of about $7 million. However, what is not known at this point if he has a non-compete clause in his contract that would prohibit him from appearing on a rival station until his two-year contract is over.”

I’ve been a regular viewer and fan of Keith Olbermann’s since he first started Countdown eight years ago and I hope he shows up on the TV machine again soon; to paraphrase his sign-off, and mix in some Dylan Thomas, I wish him good luck, and I know he won’t go gently into that good night.