I’m a reporter for The Observer Dispatch. I don’t want to hear any wise cracks from Utica residents like, “What reporters?” I’ve heard them all. Yeah, there’s a few of us, too often relegated to local puff pieces; but we’re there.

I also have a contact within the Oneida County Deputy Sheriffs who owes me a lead. Highly placed.

I’ll tell you my story first, then ask a question.

I was sleeping in my bedroom on Seymour; just north of the Parkway. The area has gone down hill since I inherited this place, but it’s still OK compared to further on down towards South Street. Sincerely, beyond that? I suggest you don’t go there.

Late Spring day, just warm enough for a swim… if you’re brave enough, the cell phone rang. Well, it actually did a version of the Batman theme. I’m an old TV show buff. I flipped my cheap cell open. It was the sheriff.

“Look, I’ve been promising to give you a little help. Meet me…”

Beautiful, warm day. Just before the community college I head south and uphill to a ridge. The sun shined through the young, bright green leaves. I took a left at the top of the hill as the two lane weaved and bobbed uphill, down and around old farms, a cemetery, and to my left I saw what looked like a small village… I took a left.

There was the gate to the compound. A few years ago what many claimed was a cult, was established here. Few knew anything about their beliefs. The gate was open and unmanned, so I just drove in. The sheriff had told me they were expecting him. How was he going to do any serious investigating if they knew he was coming?

Still, I was amazed at the trees; the beauty of the compound. I turned off the Honda, stood up with the door open and stepped away just a little. I saw friends and neighbors all wandering toward the back of the main building: an old, well kept, victorian that would have made Scarlet proud. A few motioned for me to follow them.

Must be the Sheriff told them I was coming, I guessed.

That’s when the slight incline caused the old Honda door to creak and then slam shut.

“Damn. My keys are still in the ignition.”

Well, I did have an Oneida County Sheriff coming to meet me here, right? And certainly he’d have something to solve this. One can hope.

So I followed my friends and neighbors, holding my notepad, around the mansion. The grass brushed against my Asics to an odd 3/4 time. I stepped on a real big nail when I was a kid and got to the doctor too late, so I’ve always had a slight limp. In back there was a giant sculpted garden that just took my breath away.

Amidst the flowers and the hedges there was a path; a maze of sorts. I followed.

There, in the middle, there must have been a hundred people or more, all surrounding what I could barely make out was a pool: more of a very large, warmed baptismal-shaped hot tub.

The birds were quiet on the backside of the mansion. The bugs were too. Odd. Why? Don’t know.

The followers let me through. They were all smiling.

The pool had a sloping walkway into it. What I assumed to be the leader was leading another follower into the depths with weights attached to him in what looked like a ceremonial belt .

I couldn’t even gasp. I was stunned. All the beauty of the day was swept away. In the deep end of the pool there must have been 20 people. Some were still alive, but obviously dying. No one was holding them there. They weren’t struggling. Living for now, or recently dead, they all had this creepy look of bliss on their faces. They just let themselves be led into the deep end of the pool, stood there and died.

Damn it! Damn it! Why? How? When did this all start? And I didn’t even bring my camera?

There was a slight shuffling in the back and my friend, the Deputy Sheriff, walked into the middle of the group. But he didn’t stop. The leader put the belt around him from the stack at the side of the pool. He was led into the pool as I watched; frozen in horror. He slowly drowned with that same annoying smile on his face.

The crowd closed in around me, the leader walked up: reaching his hand out to me. All smiling that frustrating simplistic smile. Someone started to put one of those heavy belts on me.

Finding a way
Of neutralizing polar
Pushes and pulls;
Disillusionments; hopes
And the subsequent expectations
That frustrate us
Is the key to freedom

Regardless of our abilities or inabilities
Or what we can endure
During the most tumultuous times in our lives
We are capable of experiencing peace
When we let go of the specific
And appreciate the unity of flow
————————————————-
2009
Jenn Weinshenker.
All Rights Reserved 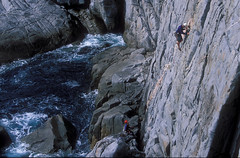 "We try to secure enough balance To determine our direction But we incessantly wobble In a sea of vane futility."

The boiling of the barley
Rejoice in hops and malt
IPA, Stout
Barleywine or Alt

Both slugs went
On their way
One bounced off a metal leg
Owned by Rick
O’
Shay
One went into a sick rabbit
Named Ray D Lepper
What…
Were you expecting
Has
N.
Pheffer?

As Trigger goes off to that great butcher shop in the sky, Scribe sings… “Happy trails to you, until we… meat… again…”

Youve got to have beauty,
if youve got talent,
thats a plus.
If youve got neither
you might as well
get back on the bus
and head on home to
Palookaville or
Altoona or
Pittsburgh, P. A.
Without those dollar signs in your eyeballs,
your face has nothing to say.

Madame Profit runs the brothel here
the phony handshake,
the elbow in the ribs,
the lurid neon leer.
The Corn God of the Midwest
may lurk near your brassiere
but youre just another quick chrome job
to a monster in high gear here.

Flash a tight smile,
fix your nose,
imitate sincere,
youre riding on the gravy train
of unholy fake-boobed cheer.
The ticket price may overwhelm you,
but have no fear,
we can enema you with overpriced celebrity
and parade you like a prize steer.