Ye Old Scribe Presents: Maverick (sic) or; One Hell of a Sick Maverick

Ye Olde Scribe’s Incredible, Inedible Quote Machine
“Don’t eat it. Read it. Cause ya can’t be too chew… see.”

For example, in a Weekly Standard column titled “McCain versus the juggernaut,” neoconservative pundit William Kristol warned that an “Obama-Biden administration — working with a Democratic Congress — would mean a more debilitating nanny state at home and a weaker nation facing our enemies abroad.” It takes a deep obliviousness to reality for an ardent Bush supporter to be sounding the alarm about the “nanny state” at the same time that his beloved president and party are solicitously spoon-feeding their wailing Wall Street brat out of a $700 billion jar of Gerber’s.

This is not a “movement” that means anything that anyone can explain. As Christopher Buckley, the son of the late William F. Buckley, intellectual father of modern American conservativism, put it in a much-discussed piece in the Daily Beast announcing his support for Obama, “I no longer have any clear idea what, exactly, the modern conservative movement stands for. Eight years of ‘conservative’ government has brought us a doubled national debt, ruinous expansion of entitlement programs, bridges to nowhere, poster boy Jack Abramoff and an ill-premised, ill-waged war conducted by politicians of breathtaking arrogance. As a sideshow, it brought us a truly obscene attempt at federal intervention in the Terry Schiavo case.”

Does she have the most annoying voice ever? It’s like a dental drill combined with a band saw…

Anyone who claims gas prices aren’t being raised and lowered for political reasons probably works for, or is invested in, Shell, Mobil, Hess…

-A-non-E-Moose; found on the web

Ye Olde Scribe Presents: Maverick (sic) or; One Hell of a Sick Maverick

END_OF_DOCUMENT_TOKEN_TO_BE_REPLACED 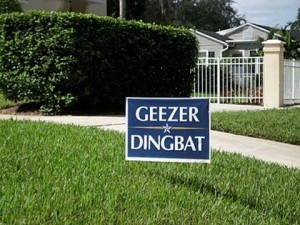 It featured battleground-state stereotypes a laid-off white male Ford Motors worker, a Latina woman trying to make ends meet, an elderly black couple hampered by chronic illness and worried about the future, et al — struggling with life in Bush’s downsized economy, but at least the people were real and their stories didn’t sink into cheesy Lifetime-channel melodrama; Obama’s interspersions in office surroundings reminiscent of Camp David were obviously intended to make the Low-and-Slow-Information-Voters of Middle America, awaiting the ballgame, feel comfortable with him as president, which was the main point of this smart $4 million investment.

Obama laid out his economic plans clearly, appeared mature and confident, and didn’t, as I recall, mention Sen. McMoribund or the Ice Princess even once. Contrast this with tone-deaf McCain’s free hour on Larry King following Obama’s spot in a country thirsting for unity and a different direction, he mostly griped about Obama and reprised the half-baked GOP themes of the past four election cycles, although he finally admitted he really didn’t believe his Democratic opponent was a socialist, negating all of the frantic rhetoric emanating from his campaign to the contrary. (Incidentally, if you know anyone who supports McCain, ask them exactly what he plans to do about the economy that is fundamentally any different from what Bush has done.)

Bill McInturff, McCain’s lead pollster, claims he has internal numbers that contradict the national polls showing Obama way ahead he proclaimed that McCain was “functionally tied” with Obama (whatever that means), but didn’t comment on why, if that’s true, McCain has been forced to spend money defending states that have safely been in the Republican column for decades, including his home state of Arizona. (Perhaps McInturff has been consulting the same secret figures Karl Rove used in 2006 when he boasted to an NPR reporter that the Republicans would hold Congress — “You may end up with a different math, but you’re entitled to your math, I’m entitled to the math.” Two weeks later, the GOP was blown out by the Dems in the off-year election. Following the drubbing, it leaked that Rove’s fatuous optimism was merely a ‘job requirement’ and not based on any inside information in other words, ‘the math’ was entirely in his head.)

McInturff’s private polls notwithstanding, and barring a monumental screw-up by Obama or Biden, or some sort of, at this point, impractical and impracticable mass voting treachery by the GOP, you can get used to saying ‘President Obama’ after next Tuesday.

When will Dem leaders start taking this seriously, and stop waiting until election time to even say anything about it? On Tom Hartmann this morning, Thom mentioned that there are reports out of Florida that “Democrats” are calling registered Democrats offering to pick up their ballots. You call back the number they called from and find out you’re calling the Republican Party headquarters. None of the ballots picked up so far have been accounted for. (Surprised?) Here is the only thing I could find on the web so far…

END_OF_DOCUMENT_TOKEN_TO_BE_REPLACED

The Tattlesnake — That Son of a Bush McCain Edition

Republican’s Confused Performance on MTP Emblematic of His Entire Campaign

All you could do is shake your head at the pathetic hat-in-hand creature that John McCain has become in his ‘man for all seasons’ pandering for votes as he grinningly jabbered, at times nearly incoherent, on Meet the Press with Tom Brokaw October 26th.

There was his complacent, auto-pilot mien coupled with his sometimes bungled Talking Point responses, and his ‘here we go loop-the-loop’ themes, as when Brokaw played a tape of McCain from June 2005 expounding: “The fact is that I’ve agreed with President Bush far more than I have disagreed. And on the transcendent issues, the most important issues of our day, I have been totally in agreement and support of President Bush,” followed by the McCain of today sketching out his supposed major differences with Junior on the Iraq War, the economy, pork-barrel spending, climate change, deficit spending, the growing size of government, the housing crisis, campaign finance reform, et al in other words, ‘the most important issues of our day.’

Brokaw also brought up his voting with Bush 92 percent of the time (according to the Congressional Quarterly) and McCain fielded that by mystifyingly mumbling, “Well, it may be the way you describe it.” What ‘may be the way you describe it,’ Senator? The portrait Brokaw was painting, albeit in soft watercolors, was of a king-high hypocrite and liar who can’t be trusted is that what you meant?

McCain also expressed his odd sense of ‘pride’ in Palin, apparently earned by attracting and firing up the kind of crowds he couldn’t collect on his own the nutcase GOP base and her possession of some sort of magical ‘executive experience’ while remaining virtually completely ignorant of the world around her or how the government of her own nation works. He also didn’t delve into what part of her abuse of power in Troopergate or the newly discovered crony corruption in her main accomplishment as governor Alaska’s $40 billion natural gas pipeline — inspired what the Bible says goes before a fall.

Along the way he momentarily forgot one-fifth of the former Secretaries of State who have endorsed him sorry, George Schultz; insisted he and Sarah Palin were ‘mavericks,’ a word that has officially jumped the shark into the Land of One-Word Laughs; and parried with Brokaw over polls he failed to recognize that showed him losing big while embracing those that had him down by a only few points, another typical McCain ‘have my cake and eat it too’ moment.

This, then, was the denial-of-reality and schizophrenia of the worst presidential campaign in modern history in the flesh while McCain tries to sell himself as a reformer unpopular within his own party, he turns around in the next instant and claims he shares the “common philosophy of the Republican Party”; while he castigates Obama as a ‘socialist’ for wanting to raise taxes on the wealthy to pre-Bush levels, he refuses to own up that he was apparently a ‘socialist’ himself several years ago when he opposed Bush’s tax cuts for the rich; while he’s been a consistent deregulator and supporter of global corporations in his 26-year career in politics who worships Phil Gramm as an economic genius, he believes in nationalizing banks and buying up bad loans in a crisis to save the economy his policies helped devastate, and therein is the crux of McCain’s overarching problem: he ultimately wants to try and revive the economy with the same trickle-down, unregulated free market, low-tax solutions that caused the crisis in the first place. How many times can you slap yourself in the forehead? If John McCain had any sense left, his brow would be purple from bruises.

McCain is simultaneously for and against the last thirty years of Reagan’s Republican Party — in short, whatever blows your skirt up, McCain’s your man; he can get on both sides of an issue at the same time.

McCain is fond of asking disparagingly “Who is Barack Obama?” — it’s obvious what he should have been asking was “Who is John McCain?”

As the polls he disagrees with show, that’s exactly the question most voters are asking themselves with less than two weeks before the election and the answer most arrive at is, “Who cares who John McCain is — I’m voting for the black guy with the funny name.”