“Some slum love out to my buddy…Gov. Bobby Jindal is doing a friggin’ awesome job in his state. He’s really turned around on some core principles like, hey, government ought not be corrupt. The good stuff…”
— Michael Steele, Republican National Committee Chairman, from an interview with Curtis Sliwa on ABC radio Feb. 25, 2009, as quoted by Abby Zimet at Common Dreams.org.

“There’s a lot of bling bling the bling bling’s got bling bling in this package. That’s how bad it is.”
— Ibid. Steele, referring to Obama’s stimulus package.

“This party [the GOP] has got to take its head out of its you-know-what and recognize that America doesn’t look like America in 1952. That America now is something very different, very beautiful that it has a lot of strips and strains to it. But, it’s real and we’ve got to get in the real.”
— Ibid. Steele.

“Sometimes I wonder whether the world is being run by smart people who are putting us on or by imbeciles who really mean it.”
— Mark Twain 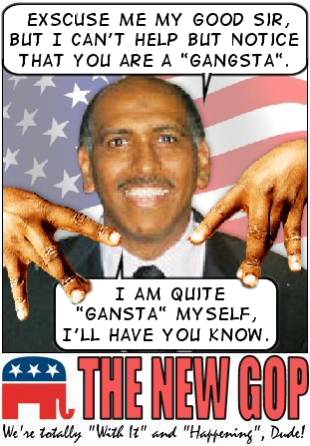 Posted on February 27, 2009 by Ye Olde Scribe Leave a comment

Amongst the rubble created by living under the eight year Junior-itis plague there are still many who suffer. Included in this wretched morass, are those who continue to drop their pants at common sense and show “more ass:” Neo Con cartoon characters. Please, if you think you can help, stay “tooned” for yet another bleeding heart plea. You know how these toad sucking Liberals are.

Sponge Bob… That’s right. The quirky little sponge has gone Neo Nitwit. He insists the taxes at Bikini Bottom must DROP to nothing but bare flesh n’ bones. He wants to squeeze all he can out of the middle class while he gets fat and drug addled: soaking in the wealth of his cartoon residuals. He looks a lot like Lush Dimbulb, only even Sponge Bob should be taken more seriously.

END_OF_DOCUMENT_TOKEN_TO_BE_REPLACED

In Bush’s version of America would this be rewarded?

What do women want? Uh, not to be ‘owned,’ to start