Unsurprisingly, the Big Media, for reasons of laziness, incompetence or complicity, have been taking the press releases from Wisconsin Gov. Scott Walker, and the Republican Party, as fact. Consequently, much of the public erroneously believes that benefits and pensions of Wisconsin public workers are ‘free’ — in other words, paid for by the taxpayers. Surprisingly, PolitiFact has been doing the same; apparently relying for their ‘facts’ on tainted information provided by the Governor’s office. Here, David Cay Johnston at Tax.com clears the air:

When it comes to improving public understanding of tax policy, nothing has been more troubling than the deeply flawed coverage of the Wisconsin state employees’ fight over collective bargaining.

Economic nonsense is being reported as fact in most of the news reports on the Wisconsin dispute, the product of a breakdown of skepticism among journalists multiplied by their lack of understanding of basic economic principles.

Accepting Gov. Walker’s assertions as fact, and failing to check, created the impression that somehow the workers are getting something extra, a gift from taxpayers. They are not.

Out of every dollar that funds Wisconsin’ s pension and health insurance plans for state workers, 100 cents comes from the state workers. [LTSaloon.org ed.: Emphasis mine.]

A picture’s worth – well – you know

Posted on February 27, 2011 by Ana Grarian Leave a comment

In Cash We Trust, but Unions We Bust 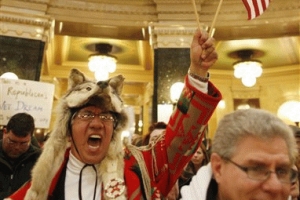 Written by Gene Lyons for Salon.com

Scott Walker zeroes in on the real enemies of the common man: Teachers, nurses and the guys who drive snowplows

Recent events in Washington and Wisconsin have me thinking that maybe we should just go ahead and change the national motto to something more truly reflective of today’s America. Forget “e pluribus unum” with its elitist overtones. Also, what people who make a big thing over “In God We Trust” really mean isn’t so much that they approve of the deity, as that God approves of them.

Think about it. In Washington, GOP Speaker John Boehner, asked about the near-certain loss of several hundred thousand jobs should severe Republican budget cuts go through, responded, “So be it.”
END_OF_DOCUMENT_TOKEN_TO_BE_REPLACED

Leave it to the Boy Beaver