Maybe I have a unique perspective on health care compared with some. Maybe not. My wife and I started with an early version of what we have today: in the 70s, the version we have now being; “health care is nothing more than a business.” Now if you count Blue Cross in the 60s: earlier. But I can’t say much bad about that version of health care. I really didn’t have to deal with it since it was part of my father’s work benefits, and the one time I had a claim they paid in full: as far as I know, no questions asked.

I was a kid. Kids usually don’t pay much attention to such things. But I do remember health care was pretty accessible for even the poor back then. I remember doctors making house calls. I remember it all being about care: not money first.

I would remember otherwise. Carmans rarely qualify as “rich,” and we have many poor in the family. I was privy to many bitch sessions about the “way things were…” “Bitch sessions?” Um, “adult” conversations. Sorry.

Believe me, I would have remembered all the moaning and kvetching, which they did about each other, kids these days, pollution, hippies… I even remember them bitching about roast beef being a “horrible” 17 cents a pound. Not a word about health care. If you got sick, or needed preventative care: you got it… even my dirt poor relatives.

Something has changed. And that “something” is the fact that we decided to let for profit corporations: insurance companies, many who wouldn’t know tetracycline from Viagra, decide who gets it, who doesn’t, according to their rather fat bottom lines.

In the late 70s my wife was working at Opryland in Nashville, and we had our first experience with what some dare to call HMOs/health care. I know people bitch about what they call, “Obamacare,” but frankly I don’t think it goes far enough, and certainly would be a damn sight better than fascistic Neo Con care system we have now. As it stands I doubt Obamacare can be much worse than what we have now; especially since it gives some exclusivity to the same companies that already rip us off; exclusivity in exchange for having to cover those they’d normally turn away.

To listen to the teabaggers they think it obscene we don’t have more dying needlessly because they don’t have enough money, or it would be better if all the poor went to emergency rooms at our expense when they have no other options. But no one ever accused such folks of having a heart. The Tinman had nothing on these callous “I’ve got mine so screw you” creeps.

I don’t like that exclusivity, but at least it gives coverage to those who can’t afford our current form of Fascistic-care. Feed the corporate coffers or die, care. But if you listen to all the screamers it’s so unfair that corporations that rake in billions now might have to sacrifice a bit so all get their inferior product. I guess teabaggers answer to health care for their poorer neighbors is a less than Jesus-ly “love them,” but, “Go ahead and die already.”

I’m amazed they haven’t demanded Dickens be burned. To them Scrooge must be a fictional saint.
END_OF_DOCUMENT_TOKEN_TO_BE_REPLACED

For Kolin the USA-Patriot Act, passed in haste by a cowed and cowardly Congress that hadn’t had time to read it after 9/11, marks the final end of formal democracy in the United States. If nothing else, sneak into a bookstore (if you still have one in your town) and read pages 142 to 152.

Here you will find the most thorough and clear dissection of this horrible law in print. Describing Title I, for example, Kolin explains: “Due process is not mentioned in the part that grants the president the authority to freeze assets at the start of, or even prior to an investigation [into terrorism], instead of after it is completed. All property seized can be disposed of according to the president’s wishes. There is no legal requirement to have a court order prior to a seizure, creating the possibility that mistakes may be made and, in most cases, won’t be corrected.”

(A bit depressing, more than a bit controversial, but some very stunning points- OEN)

The United States is a police state.

Not in danger of becoming one.

And it’s too late to restore democracy.

That’s the stark message of Andrew Kolin’s brave, lucid and important book “State Power and Democracy: Before and During the Presidency of George W. Bush.”

Kolin comes out swinging like Joe Frazier. Illusions and delusions about America as a democracy, much less one that is benevolent, don’t stand a chance.

END_OF_DOCUMENT_TOKEN_TO_BE_REPLACED

Something to pep-up the old spirit

THOUGHT FOR THE DAY

“The tragedy of life is what dies inside a man while he lives.”
Albert Schweitzer

And Now a Message From… 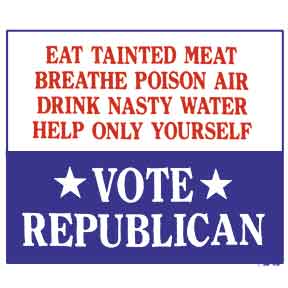