Remember Labor Day? The factories would all close. Huge picnics would break out and the last days at the beach would be celebrated, and schools would start the day after.

NOW, we’re a service industry driven economy. Restaurants and stores are all open. Schools have all ready started in August killing hopes of any late summer plans. Everyone is working to serve the public to squeeze that last dollar out of their pockets, ’cause it’s winter clothing sales at the retail stores now “Gotta get that snow suit and Halloween Decorations before they run out”.

And our dear leader, Ossama, is going to magically pull jobs out of his ass, of course he’ll take credit for the holiday hiring jump, but that’s just more service jobs.
When are you going to get it through your thick, Black skull that if you don’t stop the out sourcing and nullify NAFTA, all we are going to be are the worlds Butlers and Chauffeurs in the next 5 years. Not to mention that everyone, except the residents in the gulf, are ignoring the fact that the BP well is still leaking more each day.
The Republicans don’t want Ron Paul. Maybe the Democrats should draft him.
But, on the other hand, unless term limits are enacted, they’re as big a bunch of assholes as their tea totaling elephant brethren.

We need to go

Back to the Start with Willie Nelson

Ron Paul has now been fully chastised by the progressive press for his desire to dissolve FEMA and return to 1900 when natural disasters were remedied by the efforts of neighbors. But our neighborhoods are not the board and batten construction that they once were. How do we rebuild the Twin Towers with volunteers, or a bridge, or dam or hospital? And where do those volunteers get the resources?

Now I’m fully aware of the power of neighbors helping neighbors. I had a neighbor who had a serious accident and was unable to work his farm. The neighbors came round with their tractors and harvested his crops for him. My neighbor has mown my lawn while we were at the hospital after my Dad had a stroke, and has plowed my driveway many times. In my town neighbors still bring casseroles to the homes of folks who are going through difficult times. And I think that after 911 and Katrina and other disasters we have seen neighbors and neighborhoods pull together to help one another out.

In late June 2006 when the Susquehanna crested at an almighty high of 33′, forcing many area residents from their homes for days, faculty and staff of Binghamton U. pulled out the stops to help more than 1,800 evacuees at the Events Center, which served as a Red Cross emergency shelter for five days. END_OF_DOCUMENT_TOKEN_TO_BE_REPLACED

TX has a sense of humor 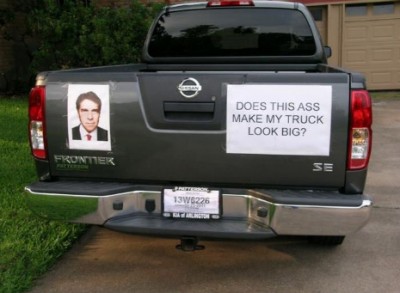 Shake, Rattle, and “Your Call Cannot Be Completed As Dialed”

Ok you West Coast Yob’s. So, we had a tea cup shaker on the East Coast, a 5.8 Earth Quake this afternoon. As soon as you get done yawning, and talking about how that’s hardly an after shock where you’re at, you’ll be ready to read the rest of this. END_OF_DOCUMENT_TOKEN_TO_BE_REPLACED