What future may bring

Posted on December 31, 2012 by Ana Grarian Leave a comment

Monsters Under My Bed 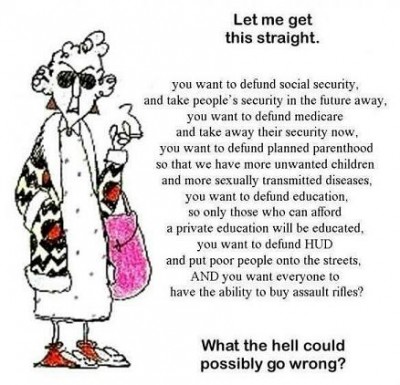 How the FBI Coordinated the Crackdown on Occupy

New documents prove what was once dismissed as paranoid fantasy: totally integrated corporate-state repression of dissent

t was more sophisticated than we had imagined: new documents show that the violent crackdown on Occupy last fall – so mystifying at the time – was not just coordinated at the level of the FBI, the Department of Homeland Security, and local police. The crackdown, which involved, as you may recall, violent arrests, group disruption, canister missiles to the skulls of protesters, people held in handcuffs so tight they were injured, people held in bondage till they were forced to wet or soil themselves -was coordinated with the big banks themselves.
END_OF_DOCUMENT_TOKEN_TO_BE_REPLACED

FOCUS: Celebrating the Prince of Peace in the Land of Guns

After watching the deranged, delusional National Rifle Association press conference on Friday, it was clear that the Mayan prophecy had come true. Except the only world that was ending was the NRA’s. Their bullying power to set gun policy in this country is over. The nation is repulsed by the massacre in Connecticut, and the signs are everywhere: a basketball coach at a post-game press conference; the Republican Joe Scarborough; a pawn shop owner in Florida; a gun buy-back program in New Jersey; a singing contest show on TV, and the conservative gun-owning judge who sentenced Jared Loughner.

So here’s my little bit of holiday cheer for you: