As the conservative media networks drive themselves into a muckraking feeding frenzy over the prospect of the upcoming work of fiction titled Clinton Cash, written by a professional right-wing conspiracy theorist and political hitman, the rest of America has picked up the question of foundation accountability out of curiosity and the tempting allure of scandal. But, in one of the countless hypocritical reversals that are all too common in modern American politics, it turns out that the Bush family foundations have been acting like they have something to hide, while the Clintons have publicly released key information about their donors, such as identity and approximate amount donated. In typical Republican fashion, they are projecting their own corruption onto Democrats and accusing the transparent Clinton Foundation of accepting the same kinds of secret bribes that the Bush Foundation has been taking for years.

Nonprofits are not obligated to reveal their sources, but the Clinton Foundation has been revealing their donors since 2008, ever since Hillary Clinton became Secretary of State, to avoid the very allegations her campaign is now being falsely smeared with. Foreign governments could have donated to her foundation in secret, as the  fictitious propaganda writer Peter Schweizer has alleged- but the donor list reveals that the foundation is clean. Tom Watson of Forbes even wrote that ”in truth, the Clinton Foundation is among the most forthcoming of major charities and nonprofit foundations—especially those headed by public figures.”

On the other hand, the George Bush Foundation raised $361.8 million dollars between 2010-2013 with no attempt at accountability or transparency. While the conservative media obsesses over creating false scandals to smear Hillary with, there is absolutely no discussion about the fact that the Dallas Morning News has investigated the Bush Foundation and found donations not only from politically connected millionaires like Sheldon Adelson but also foreign governments like the United Arab Emirates and Kuwait.

Similarly, the George Bush Presidential Library has assets of $47 million and receives $3 million a year from undisclosed donations, functioning as yet another vehicle to funnel campaign and influence money through with no record or transparency, and was accepting donations all throughout George W. Bush’s presidency- another way for the millionaires of America to buy power and favors while trampling over the American democracy.
Want to read more? Please click…

The Right Is Race-Baiting on Baltimore.

Most weeks, New York Magazine writer-at-large Frank Rich speaks with contributor Alex Carp about the biggest stories in politics and culture. This week, the magazine asked him about the politicization of the Baltimore riots, Supreme Court oral arguments on same-sex marriage, and writers’ protests of Charlie Hebdo.

onservative reaction to the unrest in Baltimore sometimes looks like a page out of the old “silent majority” playbook. The right has so far blamed the crisis on unions, welfare, single-parent families, Democrats, the “animalism” of Baltimore residents, and President Obama. Is there a political agenda taking root to exploit this crisis in 2016?

If there is, the country is going to pay a huge price. To exploit urban riots as a wedge issue, as Richard Nixon did in 1968, is to pour gasoline on the flames. And there is reason to fear it is already happening. At the crudest level — as Larry Wilmore graphically demonstrated on Comedy Central last night — we have the spectacle of Fox News commentators falling over themselves to repeat the name of one particular Baltimore gang, the Black Guerrilla Family, over and over. (Such other Baltimore gang names as the Bloods and the Crips just don’t cut it anymore if you are in the scaring-whites business.) At the more serious level, we have a lead columnist in this morning’s New York Post all but wishing that New York might become “another Baltimore” so that blame can be placed on its Democratic mayor and the Democrats in general.

Then we have Rand Paul, who in an interview with the conservative radio host Laura Ingraham yesterday, joked that he was “glad the train didn’t stop” in Baltimore when he passed through it this week. Remember Rand Paul? This is the one Republican presidential hopeful who has been making a point of reaching out to African-Americans. He doesn’t seem to realize that not stopping in Baltimore is exactly the problem for him and his peers. Speaking as someone who has family there and has spent good chunks of the past four years there, I can join the many who attest that any national politician who didn’t know the despair in this city, 40 miles from Washington, was simply in a bubble, sleepwalking, or didn’t give a damn.

CINOS, or Christians In Name Only

“The civil rights of none shall be abridged on account of religious beliefs or worship.”
— James Madison

It’s been a very long time since I’ve been to church. Despite that fact, I consider myself to be a far better Christian than lots of people who never fail to take their place in the pews each week. In fact, it just might be that my long absence from Sunday services has helped make me a better Christian than lots of people who are in regular attendance at the mega churches and fundamentalist hoedowns. I learned the basic principles of the faith when I was a little boy, and those simple ideas haven’t been corrupted in my mind by the ministrations (and the frankly political agendas) of ministers who sometimes seem a little unclear on the concepts Jesus was promulgating while he was here. Love thy neighbor as thyself. Judge not, lest ye be judged. Let he who is without sin cast the first stone. We are all God’s children. Peace and love. Those are among the basic ideas I was taught as a church-going child, and they’re the primary ideas that stuck in my mind, and at the center of my moral universe. That doesn’t mean I always practice those beliefs, or live up to those ideals, but I still believe in them.

Bud Light, Where “Up For Whatever” Means Getting People So Drunk They Can’t Say “No” 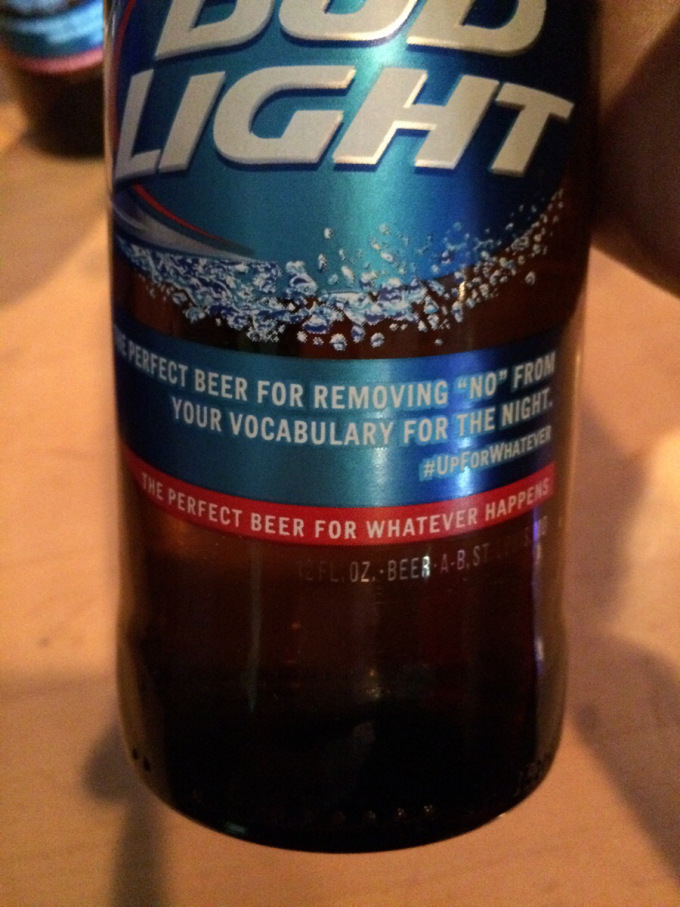 Bud Light continues to creep people out with the implied lechery of its “up for whatever” marketing campaign. The latest apparent gaffe from the country’s most popular watery beer is a tagline reminding drinkers that Bud Light is a go-to beverage for turning a “no” into a “yes.”

As posted on reddit, the tagline on this Bud Light bottle reads:

“The perfect beer for removing ‘no’ from your vocabulary for the night,” followed by the requisite “#UpForWhatever” hashtag, because being “up for whatever” obviously means “spreading Bud Light’s marketing message in a way that can be tracked and quantified by our social media team.”