George W. Bush Did Something Much Worse Than Lie Us Into War

The Iraqi regime possesses biological and chemical weapons, is rebuilding the facilities to make more and, according to the British government, could launch a biological or chemical attack in as little as 45 minutes after the order is given. The regime has long-standing and continuing ties to terrorist groups, and there are al Qaeda terrorists inside Iraq. This regime is seeking a nuclear bomb, and with fissile material could build one within a year. 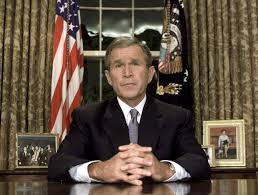 Something critical is being lost in the torrent of pixels being spilled by the media as Jeb Bush wriggles haplessly, like some prehistoric insect trapped in amber, struggling to explain away, recast or rationalize his brother’s hideous legacy. Many of us with functional memories concluded long ago that Jeb’s brother deliberately lied us into a pointless war, one that resulted in pointless maiming and pointless deaths of our own soldiers and perhaps a million Iraqi civilians, and the equally pointless rise of a nihilistic cult of deluded savages we know as ISIS.

Dogs.
Sorry feline fans, but no cat can compare. Yes, I admit: I have a prejudice here.
Dogs have been with us since we became sentient. I’m sure they were attracted to our camp fires, or our warm caves; maybe both? They are scavengers, but kind ones… mostly. And they love being part of the pack. Doesn’t matter if you’re white, black, hippie-like, a racist, left, right, atheist, cult leader… dogs just want to be with you, play with you, share the joy of life with you.
How many times did we have to take Batmutt, our last pup, back to our porch, to remind him, and his companion Frankincense the collie, to “stay,” when we had to leave? Dogs so want to go everywhere, anywhere, with us.
Batmutt, the Don Quixote of dogs, died the day before I started writing this. For many, many months, maybe half a year he slowly slipped from that well loved, windmill seeking, noise box who would challenge leaves when they moved, bite sea waves, spin in circles, into being, oh, so silent.
He was called “Batmutt” because I commented, when we got him, that if you put wings on him he’d look like a bat. END_OF_DOCUMENT_TOKEN_TO_BE_REPLACED

Reviewed by Ken Carman for PGA

I don’t get it. What’s all the kvetching about? Before going to Tomorrowland I read a few reviews: not good. While they praised the special effects, pretty much every reviewer said the script was confusing and inept.

This has been a problem for me. I not a big Disney fan and have reciev ed some scorn, since response to such is usually, “But it’s… DISNEY!!!” It’s like a religion. I prefer WB, Jay Ward and other, darker themed, deep, complex, fare’.

Yes, I find their animation amazing, but also find their scripting often fair to occasionally pathetic. Taking a guess here: I think the mouse does many scripts by committee: “committee” of highly paid, yet not so talented, suck ups who got there because they are human Electroluxes.

I had nothing to worry about here. While Tomorrowland starts a little slow and, yes, confusing, clarity comes relatively fast when George Clooney’s character, as a boy, brings his invention to the 1960’s World Fair.

As an aside: not only did they visually capture the NYC fair, they did in spirit too. And I went several times. I really felt like I was there again.

The basic story is of an alternate plane, another dimension, another reality… does it really matter? … where brilliant people, the best, the brightest, the most imaginative go. But Tomorrowland is broke and Clooney is dragged back as an adult by two precocious girls… OK, one’s an android, though they call her a “robot…” to help fix Tomorrowland which is also affecting this reality, plane, dimension, whatever. Unless Tomorrowland is save lack of hope will destroy us.

Best seen on the big screen: this is a big, amazing, world, not a “Small, Small…” one.

While the theme is a tad simplistic, it is executed with perfection, with no little help from stunning visuals. There are a few unexplained glitches, like, “What is it with the weird tube-like clock,” that keeps appearing in the movie with little to no explanation. Reminds me a bit of Frank Baum’s clock that Baum insists on dragging across the stages offered by the various Oz books.

As a former English major I love metaphors, interpretation… but unless we’re talking about theater of the absurd where pointless is the point, like Waiting for Godot, there really should be a point.

But, because of all his brilliance, I can forgive Baum, allow him some leeway to vent a muse. And while I wouldn’t put the script writers here on the same pedestal, I can forgive them too.

Not much “leeway” is needed here, for Tomorrowland, as simple as it may be, is a beautiful, meaningful, uplifting movie.

Here’s a short, short story I have written, and rewritten, many times. After all who died in our wars this reminds us there are other ways to lose what they felt they were fighting for. So, somehow, I imagine this story well suited to present to you, my readers, this Memorial Day…

Feeding the Monster
by Ken Carman

Once there was a land where a tale was told of a monster who stole away freedom, ate it up like other fables told of creatures who ate children, trolls who lived under bridges who did unspeakable things to those who dared to pass over those bridges. One might argue “the monster who stole away freedom” was the lead monster: he who helped all the others commit their horrible acts. END_OF_DOCUMENT_TOKEN_TO_BE_REPLACED

Flashes of Red, Gold and Green 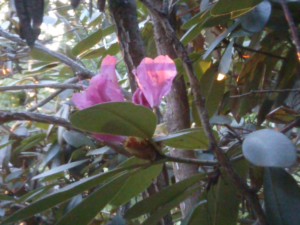 Across the way, the sun peeks orange over the hills, and just outside my window a single flash of magenta on the rhododendron. It is cold here this morning. Colder now at 7 than it was at 5, when I got up. One of the advantages of a wood stove is the joy of cutting the morning damp with a small fire.