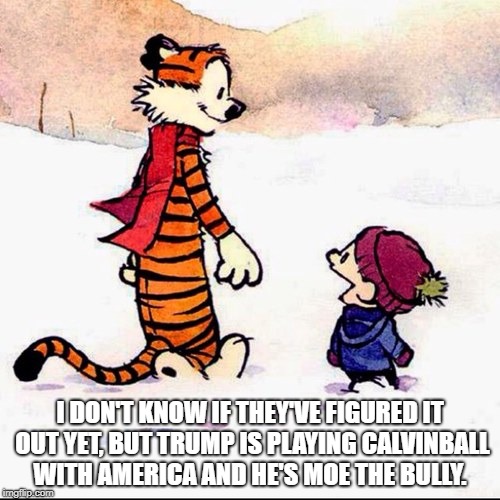 It’s 2020 and Hillary has been president for almost four years. We are on to yet another Benghazi hearing, another E-mail hearing, plus other supposed

‘scandals’ being investigated right up until Election Day. Little has been accomplished because the tactic of blocking everything Obama tried to do has continued; put on steroids. Congress is, and remains, in Republican hands; even more so after 2018. We also didn’t count on was just how much election fraud was out there, how much interference; even from foreign sources.
Some of those who supported Bernie say, “Bernie would have known how to handle this. You wouldn’t have had this if Bernie had become president. He not only would have won with more votes, known how to handle the Republicans, but he would have had long coattails.” END_OF_DOCUMENT_TOKEN_TO_BE_REPLACED

If liberal billionaires like Tom Steyer want to have a real and lasting impact on American politics, they should seriously think about buying a nationwide radio network.

Bloomberg reports that iHeartMedia LLC, previously known as Clear Channel, is “open to takeover talks.” It’s the largest operator of radio stations in the nation.

The simple fact is that if Richard Nixon had had hundreds of radio stations in virtually every city or town in America of any consequence, with all of them running right-wing talk nonstop, it would have been difficult to impeach him.

Sy Hersh: I Knew Richard Nixon Beat His Wife in 1974, but Did Not Report the Story

oon after President Richard Nixon resigned in 1974, Seymour Hersh got a call from a source at a California hospital. He learned that Nixon had beaten his wife so severely in 1974 that she sought treatment at an emergency room. Hersh did not report the story. Years later, he received criticism for this choice. We speak with Sy Hersh in New York City. He says of his decision not to report on Nixon beating his wife, “I was obtuse to the notion that it was a crime. … I didn’t get it.”

AMY GOODMAN: Before we go to break, talk about what you learned about Richard Nixon that you didn’t report.

Russian trolls posing as an American college student tweeted about divisive social, political and cultural issues using an account that amassed thousands of followers — and appeared in dozens of news stories published by major media outlets — as recently as March.

More than 50,000 people followed @wokeluisa, an account that featured a photograph of a young black woman who called herself Luisa Haynes and claimed to be a political science major from New York. Twitter has identified @wokeluisa as the work of the Internet Research Agency, a Russian troll farm and propaganda operation linked to the Kremlin.