Posted on September 30, 2020 by Ken Carman Leave a comment 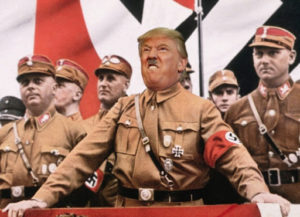 The president is telling the truth. In fact I think Trump tells the truth more than we think, he just doesn’t fill in the details.
I’m sure he’d want you to look at the protests. Don’t actually examine them. Ignore that the protests were peaceful at first, not all that highly organized. Ignore the small numbers of highly organized fascist movements whose intent is turning protests into anything but peaceful. Be fooled by his usual classic, yet clumsily handled, magician’s tactic: misdirection.

Ignore Proud Boys, Boogaloo, militia-types who start things like fires in Nashville’s historic courthouse. Ignore those who think it perfectly legal and justified to drive through protests, then make up excuses why attempted murder should be accepted. Claim you felt “threatened.”
Feel ‘threatened?’ Don’t like crowds angry at you? Then don’t drive into the middle of them trying to murder as many as you can.

And this, perhaps, is one of the biggest indicators of what’s going to happen if Biden wins. How do you think these same Brownshirts would behave once Trump loses? You know he won’t go away quietly. You know there will be no peaceful transfer of power. You know the answer will be the same as it was in Independence Day. What do they want? END_OF_DOCUMENT_TOKEN_TO_BE_REPLACED

“Own the Libs” Is Gradually Morphing Into “Kill the Libs”

f Florida Gov. Ron DeSantis gets his way, people who merely attend a protest that results in property damage will be prosecuted for felonies. Yelling at someone in a restaurant as part of such a protest will be a criminal offense. And a driver who kills demonstrators with his car will not be liable for their deaths, as long as he is “fleeing for safety from a mob.”

These are just a few of the policies proposed by DeSantis in a package meant to chill dissent and punish those in the streets demanding an end to racist police violence. Republican leaders in the Florida Legislature have promised to file the bill in 2021. By introducing it now, DeSantis clearly hopes to rile up Trump’s base in Florida, one of the most crucial swing states, with fears of black-clad cabals rampaging through their gated communities. But the specifics of the proposal are worth close consideration, because it represents a rising consensus among conservative leaders under Donald Trump: A governing ethos that once boiled down to “troll the libs” is steadily escalating toward “kill the libs.”

U.S.—For the common good of Americans, the next presidential debate will be held aboard a rocket. That rocket will then take off. Then, it will smash into the sun after the two passengers debate for the few months it takes to get there.

Their debate will be broadcast live. It is expected to draw millions of viewers, who will be comforted by the idea that the two candidates will smash into the sun.

DONALD TRUMP JR. CALLS FOR VOLUNTEERS TO JOIN AN ‘ARMY’ AND ‘SECURE’ THE 2020 ELECTION

A new video ad appearing on social media features the president’s son, Donald Trump Jr., urging volunteers to join an “army” and keep the “radical left” from succeeding in their attempt to “steal” the 2020 election.

Dozens of people had gathered in Albuquerque for a third night of protests demanding justice for Breonna Taylorwhen a car barreled through the crowd, hitting several protesters.
“It just went straight into the middle of the crowd and veered off toward the left,” said Samantha Colombo, 25, an Albuquerque resident who said they’ve been protesting with dozens of other people for three nights at the same intersection. No one appeared to be injured, Colombo said. Video of the incident began to circulate on Twitter on Friday.
Want to read more? Please click… HERE!!!