Dr. Laura’s New Book: ‘Proud to Be a Redneck Piece of White Trash’

After 85 Years, Little Orphan Annie Creaks to an End

The Tattlesnake Who Said What? Edition

Time for a quiz? I thought so. Grab your paper and pencil and no cheating with the Google machine. As you read, you’ll catch on to the theme of this baker’s dozen of questionable quotes:

1. “Fascism should more appropriately be called Corporatism because it is a merger of state and corporate power.”

2. “Socialism is a fraud, a comedy, a phantom, a blackmail.”

3. “War alone brings up to their highest tension all human energies and imposes the stamp of nobility upon the peoples who have the courage to make it.”

4. “We must be prepared to face our responsibilities and be willing to use force if necessary.”

5. “The fate of nations is intimately bound up with their powers of reproduction.”

END_OF_DOCUMENT_TOKEN_TO_BE_REPLACED

The Shrew(s) by Chuck McCoy

Here’s the first of what we hope will be many posts here by Chuck McCoy. For more of Chuck’s cartoons and writing, go to his website: Chuck McCoy.com 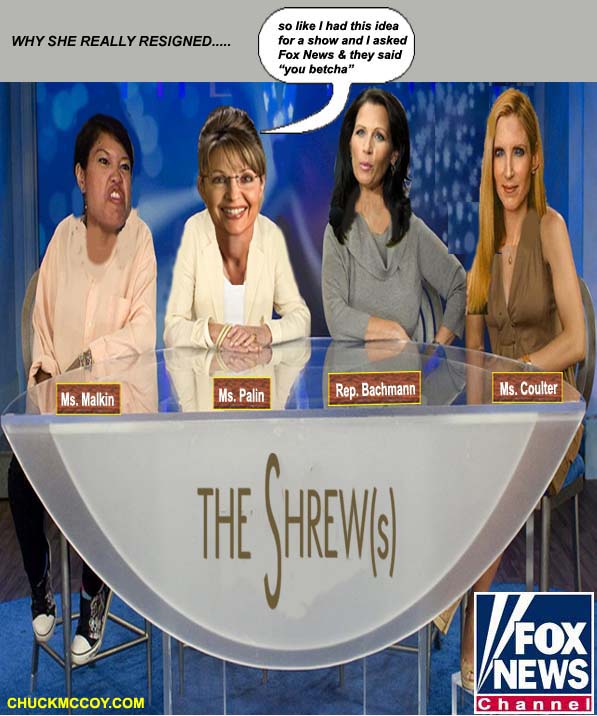 The Tattlesnake I Heard It Through the Grapevine Edition

There’s nothing more reliable than anonymously-sourced comments, as readers of the NY Times well know

Item 1. “Here’s the way it worked in the GOP when Bush Junior was in office: If some Republican senator or representative threatened to vote against the White House on an important issue, they’d get ‘The Call,’ which went something like: ‘Okay, you vote any way you want but, when you’re up for re-election, don’t count on any help from the RNC, and we’re gonna call the big money donors to the party and tell them to take you off the list. Oh, and we’re also gonna run a heavyweight Republican against you in the primary, so you may not even get to run for re-election. So, you go on and cast your vote however you want.’ You could count the number of Republicans who crossed the line on one hand. I don’t understand why the Democrats can’t do this with the Conserva-Dems.”

Item 2. “These big biotech companies like Monsanto have labs down in Mexico that experiment on all kinds of weird sci-fi stuff they couldn’t get away with in the States. This new Swine Flu virus H1N1 — is some kind of mutant combo of bird flu, swine flu and a human flu. How did those three get together naturally? If one of these weirdo genetic combos got loose outside the lab and started making people sick, you really believe in your wildest dreams that Monsanto or whoever is going to fess up and say ‘Whoops our bad! We goofed and this genetically-altered mutant virus we created got loose!’ Sure — the billions in lawsuits and bad PR would bury them.”

Item 3. “Arlen Specter’s dreaming if he thinks he’s going to win the Pennsylvania Democratic primary. Off-year primaries are where the real party faithful vote and some of these folks still remember when Specter jumped from the Democrats to the Republicans in 1965, and they’re still pissed about it. Any credible Democrat could beat him. Hell, Chris Matthews could beat him. Specter could maybe save his bacon if he became a real progressive Democrat, but he’s already shown he’s not going there. Obama and [PA Gov. Ed] Rendell will say a few good words about him, but that’s not going to save him. That old man’s living in a fairyland. His ass is astroturf in 2010, in my opinion.”