Paul Ryan’s Death Panels — What a ‘Cause’

If you have a serious illness these days, $8,000 dollars gets you in the door of a good horpital, but doesn’t cover much else. But this is what GOP House Budget Czar Rep. Paul Ryan is proposing — that seniors over 65 get a ‘coupon’ worth $8K total instead of Medicare and give themselves over to the untender mercies of the ravenous health care insurers. Gee, what a bleeding-heart compassionate conservative this goofball ‘Profile in Courage’ is. It’s a GOP horror movie, “Die, Grandma, Die!” Former Rep. Alan Grayson had it right: “If you get sick, America, the Republican health care plan is this: Die quickly.” Ryan was correct about one thing: his ‘Help the Wealthy’ scam is definitely not a budget.

The consequences of three decades of anti-government Reaganism and free-market extremism are now coming clearly into view, a cruel and brutish America split sharply between a few lucky haves and many desperate have-nots.

As Rep. Paul Ryan proudly declared in unveiling the Republican budget plan for fiscal 2012, “This is not a budget; this is a cause.”

It is the “cause” advanced in the modern era by President Ronald Reagan and economist Milton Friedman. It calls for further slashing the tax rate for the richest Americans by another ten percentage points, from 35 percent to 25 percent, while enacting a wide range of domestic spending cuts, including phasing out the Medicare health program for the elderly as it has existed since the 1960s.

Under Ryan’s plan, senior citizens in the future would have to select a private health insurance policy with the government paying “premium support” worth about $8,000 to the company, thus shifting a heavier, even crushing, financial burden onto the elderly.

And, since Ryan’s plan also would repeal President Barack Obama’s health reform, which prohibits insurance companies from excluding coverage of “preexisting conditions,” senior citizens suffering from chronic illnesses might find themselves unable to get coverage of those ailments and likely consigned to a premature death.

The News Pauper: This Is It

The News Pauper humbly regrets his inability to post regularly. It in no way reflects on the dear readerhere is my latest attempt to say something regarding what is certain to become the most devastating disaster done to us by the Bush-Cheney Cabal.

The NP suspects British Petroleum CEO Tony Hayward is making these insane comments in order to divert attention from the fact that BP is not going to let their profits go to save a bunch of fucking turtles. Until they can cap that well and feed it into tankers, theyll let that baby spill. Hell probably get a bonus too, if he can successfully bullshit his way through the crisis and keeps those stock prices up.

I think that the South deserves to be polluted for generations. Their backward thinking and blind support of the robber barons that twisted their trust and faith and patriotism has finally come home to roost. Already there have been anecdotal stories popping up of oil-tinged rain falling in central Florida, there have also been reports of a more reliable nature telling of fisherman engaged by BP in the cleanup becoming ill with nosebleeds and respiratory ailments. How many American lives will be sacrificed to the all-powerful oil company, British Petroleum? Did we lose the Revolutionary War?

If the GOP thinks that the South will sweep them into power again simply because this accident occurred under Barack Obamas watch, they’d better think again. I predict that the presidents cool will carry him through even this horrible event. I think that even the low information reactionary will see through any attempt at steering the blame away from those actually responsible. Even with a mass media that is owned and operated by the energy concerns squelching the stories coming out and priming the memes that do come out, this event has seeped into the conversation in every room in the country. There are suddenly experts in every comment column with vast knowledge of what is being done and many predictions of varying degrees of doom about the outcome. I cant see how an entire summer of increasingly dismal news coming out of the Gulf of Mexico will contribute to the popularity of the ‘Drill Baby Drill’ bunch.

It seems that every time some really bad event takes place anywhere in the world, Dick Cheneys Halliburton is smack in the middle of it. I think this is it for BP, Halliburton, and with their demise will come an era of fierce reprisals and reassessment of the way things are done in the future. If Deadeye Dick lands in St. Helena, like Napoleon, for the rest of his natural life, thatll be icing on the cake for those of us whose peace and tranquility he has stolen forever.

END_OF_DOCUMENT_TOKEN_TO_BE_REPLACED

The Secret Life of Charles Krauthammer

END_OF_DOCUMENT_TOKEN_TO_BE_REPLACED 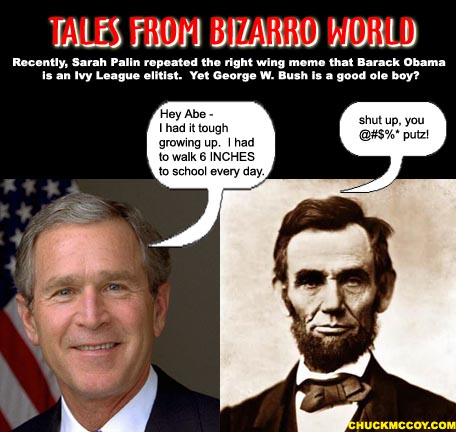 …and remember, the world is cube shaped, not round.

This Week’s Time-Wasting Media Obsessions Rolled Into One

AMERICA – Golfer Tiger Woods crashed his Escalade into a White House Party yesterday, stopping long enough to get his picture taken with President Barack Obama before getting cracked in the mouth with a three-wood by his wife Elin.

Later in the evening, violence again broke out as Sarah Palin and Levi Johnston had a fistfight over who was dreamier in The Twilight Saga: New Moon – Taylor Lautner or Robert Pattinson. Following the fight, Oprah Winfrey quit her show and several others escaped in a poorly-made weather balloon.

Next Week: Health Care, Afghanistan and other issues will be covered, unless Madonna or Britney Spears do or say something stupid.