The Tattlesnake — Was Donald Trump Born in Jamaica, South Africa or Mexico?

Now there seems to be some question about Donald Trump’s birthplace. (That those questions were apparently invented out of thin air, possibly for humorous reasons, is of no consequence.) As we know from the example of the right-wring media, any question involving your place of birth must be answered by a slew of legal documents which they will then reject as forgeries and demand more, just as Trump, to goose up his pathetic TV show’s ratings with a presidential bid, is demanding that Obama release his ‘long form’ birth certificate since the short form, adequate for obtaining a US passport or entering the military, just isn’t enough for the blubbery mass of ham and ego some call “The Donald.”

Consider this: Not one person at the Jamaica, New York, hospital where Trump claims to have been born remembers his birth, as far as I care to find out. Aside from that, Trump’s alleged ‘real’ birth certificate doesn’t specify it is a hospital in Jamaica ‘New York’ — it simply says “The Jamaica Hospital.” What is Trump trying to pull here, MON? Was he born in the islands and smuggled into dis country? 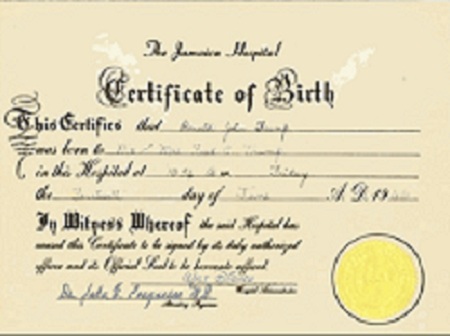 And where are the contemporaneous 1946 newspaper birth announcements for the baby Donald? Obama has provided two; Trump has provided zero. And look closely at the signatures of the hospital administrator and attending physician — are we to believe Walt Disney was running Jamaica Hospital in 1946 and a ‘Dr. John E. Conqueroo M.D.’ delivered Donald Trump?

Below, Dr. Kevin Rooney, a birth certificate expert and well-respected forensic doctor simply because I want him to be one, makes a compelling argument that Trump was born in South Africa and didn’t enter the United States until he was 15. (Just ask yourself: do you know of anyone who saw Trump in this country as a child?)

Some malcontents may argue that Dr. Rooney’s South Africa theory is short on facts, but, IMO, what it lacks in factual content it more than makes up for in bold, risible audacity. Besides, how can you argue with a copy of Trump’s real South African birth certificate? Who could possibly have the expertise and desire to forge something like that?

Donald Trump’s Real Birth Certificate Reveals He Is a Foreigner 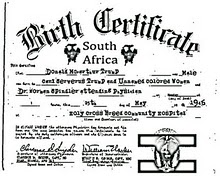 Trump was born in South Africa. His father was there on business (buying diamonds) and conceived Trump with a woman he met there. You can see her Dutch genes in Trump, the light reddish hair and very fair skin is Low Country Dutch. Donald Trump was raised in Cape Town according to strict Dutch customs which are very socialistic. (This is where he developed his great relationship with “the blacks.”)

When Trump was fifteen he was brought to New York by his father. Trump never talked about his South African background for fear of reprisals by Americans who hated apartheid.

Two years ago, when Obama was elected, Trump decided to run for president. He spent three and a half million dollars over two years manufacturing an American birth certificate, bribed doctors and nurses to say they had been present at his birth, and even hiring for life a troupe of actors to play his childhood American friends, college classmates and professors, etc. He has a staff dedicated to manufacturing articles about his ‘life’ in America, etc. He is hoping to become President of the United States, beef up its military by cutting off all unemployment funds, and finally invade South Africa and reinstate apartheid so his elderly mother can go to the beach without a gun. …

Another eminent historian has advanced the theory that Trump was actually born in Mexico. Read it all at “Was Donald Trump Born in Mexico?”

I think it is incumbent upon Trump to withdraw from the GOP presidential derby and public life until he can prove where he was born to my satisfaction.