What Will the Birthers Do Now?

Obama has released the long-form birth certificate they’ve been demanding, but it won’t make any difference to the hard-core Birthers. After all, they don’t like Obama so they will never trust this evidence. Better to wallow in their paranoid conspiracy theory which also doubles as a nice front for their rampant racism. MSNBC reported the story this way:

WASHINGTON — Responding to critics’ relentless claims, President Barack Obama on Wednesday produced a detailed Hawaii birth certificate in an extraordinary attempt to bury the issue of where he was born and confirm his legitimacy to hold office. He declared, “We do not have time for this kind of silliness.”

By going on national TV from the White House, Obama portrayed himself as a voice of reason amid a loud, lingering debate on his birth status. Though his personal attention to the issue elevated it as never before, Obama said to Republican detractors and the media, it is time to move on to bigger issues.

“Over the last two and a half years I have watched with bemusement, I’ve been puzzled at the degree to which this thing just kept on going,” said the president. […] 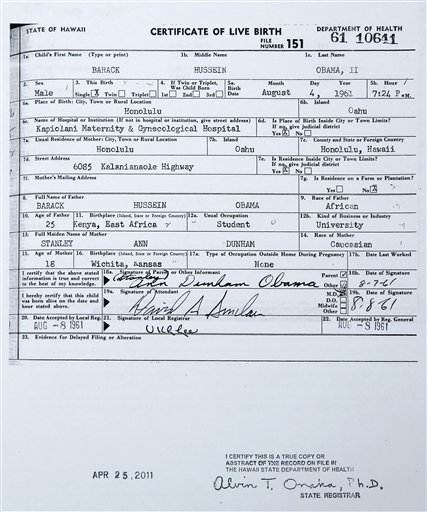