Bill O’Reilly: “Let me be very bold and fresh again, do you believe that you are smart enough, incisive enough, intellectual enough to handle the most powerful job in the world?”

Sarah Palin: “I believe that I am because I have common sense and I have I believe the values that I think are reflective of so many other American values, and I believe that what Americans are seeking is not the elitism, the um, the ah, a kind of spineless, spinelessness that perhaps is made up for that with some kind of elite, Ivy league education and, and a fat resume that is based on anything but hard work and private sector, free enterprise principles. Americans are could be seeking something like that in positive change in their leadership, I’m not saying that that has to be me.”

All that’s missing is the ‘such as’ 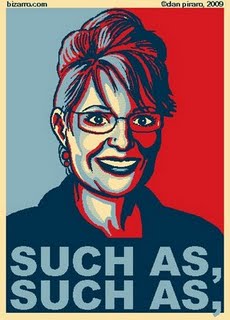 A h/t to Cenk Uygur of The Young Turks for his article and video.