The Tattlesnake – Jon Stewart WTF?!? and Other Miscellaneous Head-Slappers Edition

— What is Jon Stewart playing at? I’m a big fan of The Daily Show star and think he’s done a great job in the past, so it pains me to write this, but WTF?!? Okay, so to make his point at the Rally to Restore Sanity he tossed Keith Olbermann and Ed Schultz under the same bus reserved for Glenn Beck and Fox News. Last Monday, Olbermann graciously took his point and even cancelled indefinitely one of my favorite Countdown segments, “Worst Persons in the World.” But the other day on TDS, here’s Stewart heaping honey on Chris Wallace of Fox News and agreeing to appear on Wallace’s “Fox News Sunday.” Yes, he took a few mild swipes at Fox’s obvious Republican partisanship, but he also equated MSNBC, the home of Olbermann and Schulz, to a AA ball club compared to the Big Leaguers at Fox. He didn’t mean that in a complimentary way, but Jon can’t seriously believe there is any parity between what Fox does and what MSNBC does. (For one thing, Fox doesn’t give a liberal Democrat a three-hour weekday morning program, as MSNBC has with conservative Republican Joe Scarborough.) Put simply: Fox lies, as Stewart well knows, and MSNBC’s progressive hosts, even though they may display passion for their side, don’t. You can’t possibly have a restoration of sanity without fact, and Jon Stewart knows that, as well. So, why is Stewart trying to make them both seem equal? A few possibilities: 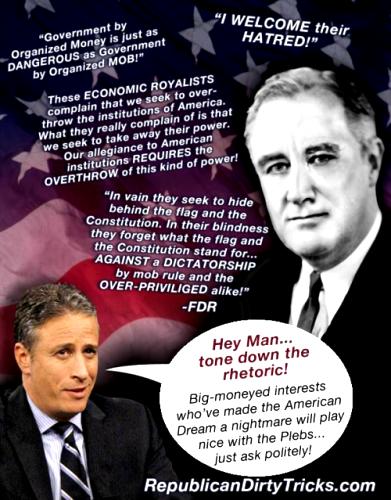 1. Since the hosts at MSNBC won’t be invited on Fox – even Ed Schultz is banned now, I’ve heard – perhaps Stewart sees himself as the voice of reason who can parry the thrusts of the Noise Machine and inject some truth into Fox’s stream-of-conspicuous nonsense. To do that, he must maintain some semblance of being ‘reasonable,’ which means to the right-wingers attacking MSNBC and progressives. Note: If this is the case, Obama has tried this tactic for the last two years and just had his head handed to him. It doesn’t work.

2. Maybe Stewart just has some personal animosity toward Olbermann and Schultz and he’s taking it out this way. That would be mighty petty of him, but nobody’s perfect, particularly in an ego-driven arena like show business.

3. This is the ugly one: Comedy Central is owned by corporate media giant Viacom and it’s possible they finally noticed TDS and Stewart have had quite an impact on recent elections and the voting trends of those under 30. Was Stewart brought in by Bush-backer and Viacom CEO Sumner Redstone for a pointed “Network” reminder of who signs his paychecks and told to back off? I have noticed Jon has been much more civil to right-wingers this year, even bottom of the barrel types like Bill O’Reilly. I’d hate to think the reason he’s promoting this ‘equivalency’ is that he doesn’t want to end up back humping the comedy club circuit doing 300 “Hey, I’ll be at McLaughington’s in Akron on Friday!” road gigs a year. He’s now a middle-aged man with a home, wife, family and a pile of bills – powerful reasons to toe the corporate line.

4. And this is the really horrible one: Perhaps his head is being turned by the ‘charm’ of the right-wing corporatists; they can be very persuasive ‘good guys’ in person, unless you remember the whole fetid history of the Republican Party of the past 30 years. I recall when Dennis Miller had his HBO show years ago: first he brought on right-wingers to lightly mock them, as Stewart does; then he had them on to explain their positions while he nodded his head; then he became one of the Pod People himself. Miller should be a warning of what happens to those who turn their backs on sanity and the facts – they end up losing their core audience, and money, as they perform for a bunch of dimwit thumbsuckers who don’t get their jokes.

5. Even more horrible than the last one: Stewart is angling for a nice, long-term berth at Fox hosting a TDS-style political satire show. It’s no secret Roger Ailes has been looking to compete with TDS; what better way than to back up Murdoch’s money truck and hire away Stewart? (Think Karl Rove: attack their strong point.) I’d hate to think this is Stewart’s motivation, but it’s a possibility.

Whatever the reason is, I wish Stewart would, in the interest of fairness, have Olbermann and Schultz as guests on his show to present their side, as he does with the Fox Newsers. (And Olbermann and Schultz should reciprocate by having Stewart on their shows to explain himself.) Let’s clear the air.

I hope this is all a tiff among friends, rather than the creation of another Miller monstrosity or Ailes attack dog.

(H/T to Bartcop.com for the graphic.)

END_OF_DOCUMENT_TOKEN_TO_BE_REPLACED

“In this world of sin and sorrow there is always something to be thankful for; as for me, I rejoice that I am not a Republican.”
— H.L. Mencken

Gov. Snowjob said on Larry King Nov. 12th that there is nothing wrong with “calling people out” on their past associations, defending her lame McCarthyite attempts to link Obama to Bill Ayers and the Weather Underground. She added that she expected she would be called out on hers as well. Good. Let’s see, she’s openly palled around with and supported for reelection convicted felon Sen. Ted Stevens, corrupt ex-Governor of Alaska Frank Murkowski, and she’s married to a former member of the Alaska Independence Party, a group that despises and wants to secede from the United States. Imagine if Obama had strongly supported two crooks and his wife once belonged to an organization that hated America? C’mon, Big Media, time to apply some fairness here, and Sarah asked for it.

Speaking of Sarah the Terror: Miller and Palin, Sittin’ in a Tree:

“Listen, she’s a great dame. People are fascinated by her because the left hate her. I think the left hate her — mostly women on the left hate her, because to me, from outside in, it appears that she has a great sex life. All right? I think she has non-neurotic sex with that Todd Palin guy. I think most of the women on the Upper East Side, their husbands haven’t been aroused since Mailer signed copy [sic] of The Executioner’s Song at Rizzoli’s back in the early ’70s.
“So they look at her, and they hate her. I think that snowmobile looks like mechanized foreplay to me, and that’s why people are fascinated by it.”
— Dennis Miller on “The O’Reilly Factor,” Fox News, Nov. 12, 2008.

I remember when Dennis had a functioning frontal lobe and was even occasionally clever, but years of drinking, drugs, chickenhawk fear, raging ego and his wiseguy notion that he’d just jump on the money train of what he thought would be generations of Republican rule softened his gray matter to the point where he’s defending a vacuous Alaska opportunist he once would have gleefully impaled with humor. BTW, I wonder what ‘non-neurotic sex’ is — the Moose Mama ‘Missionary Position’ (that would be a ‘rear mount’) or the opposite of whatever you call it when Miller picks up his paycheck these days?

My sympathies to the frustrated Mrs. Miller, if she’s still around married to a goofball who thinks snowmobiles equate with foreplay can’t be a pleasant existence.

It’s was so bad even Billo took note of what had surfaced in his ‘No Spin Zone’ punchbowl: