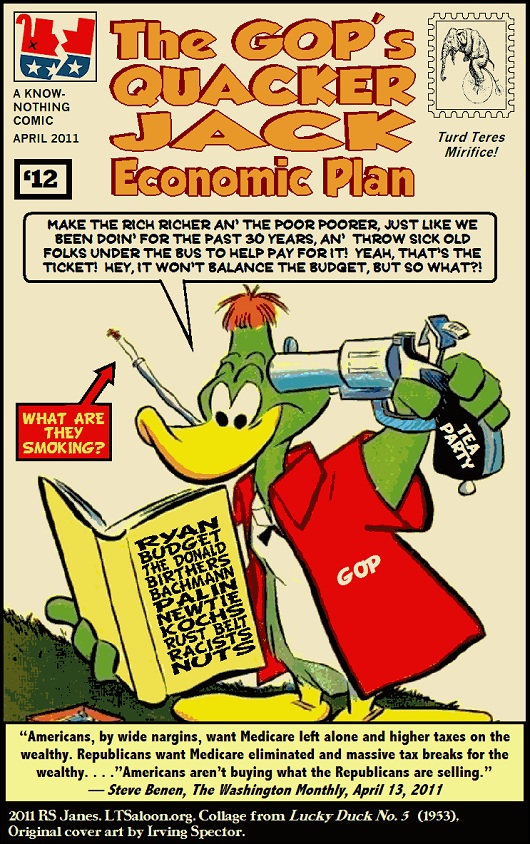 “Con artists have a word for the inability of their victims to accept that they’ve been scammed. They call it the ‘True Believer Syndrome.'”
— Matt Taibbi, “Wall Street’s Bailout Hustle,” Rolling Stone, Feb. 21, 2010.

You know you’re in trouble when your keynote speaker is Glenn Beck, the current Dancing Bear of the Fox Evening Zoo and promulgator of preposterous pompous carnival-clown revisionism of everything from the political thinking of progressive Tom Paine to the nature of Marxism. (Well, at least he left the cry-eye Vick’s VapoRub in the dressing room for this event.) Beck, like the rest of the Fox News team, seems to delight in unapologetically getting it wrong, time after time, and he knows his fans never read such authors as Paine or Karl Marx so, with skillful editing, ventriloquist Glenn can plant whatever Bizarro World ideas he desires in the mouths of the departed and defenseless. The most dedicated inhabitants of TV’s Beckistan no doubt reject the proof of their own eyes and ears when confronted with any reality that veers from the Ringmaster’s teachings, as any mind-locked True Believer does. It’s a matter of faith — in a Republican Jesus, or Roger Ailes’ political ads disguised as news, or Frank Luntz’s fright-laden euphemisms, or a former beauty queen turned half-term governor from Alaska. It’s amazing that they wave the flag of freedom so strenuously they apparently only want the freedom to follow a leader, and down the narrowest of ideological paths, at that.

Speaking of Gov. Mrs. Palin, she was not in appearance at the Conservative Political Action Conference; not only could the organizers not meet her hefty price for speechifying, but she perhaps discerned, with the dumb canniness sometimes given to the vapid, that she wouldn’t be welcome in a crowd that voted Mitt Romney first in their last three presidential straw polls.

And then there’s the bright-eyed Romney himself; like most of his party, the former Massachusetts governor stopped making any consistent and coherent sense long ago; his speeches are now grab-bags of memorized GOP Talking Points and anti-Obama crowd-pleasers, but he has mostly refrained from the cringe-inducing personal vignettes such as tying incontinent pets to the roof of the family ride for a jaunt on the open highway or his Milquetoast macho-man exploits of gunning down small rodents with a hunting rifle. The things most people would be embarrassed to admit, Mitt banters about airily with a male model’s manly grin, which I guess proves he is a Republican to his core.

And speaking of core Republicans, we have Mr. Cheney, Richard the Lyin’-Hearted, a man with no intelligence or military experience (an appointment as Secretary of Defense does not make one an expert on interrogation or confinement), who openly boasts that his unconstitutional torture program worked, believes he competently handled his role as White House counter-terrorism chief prior to 9/11, and has a long, clanking string of wrongheaded predictions following him like a trail of empty cans tied to a cat’s tail. Cheney is arguably the most disliked politician in America, but in the upside-down world of CPAC, he is a national champion and was greeted with the garlands of approbation by the assembled worshippers in Washington that he once erroneously said would be thrown at our troops in Iraq. Perhaps as a sign of how far out in the ozone the gathered Republicans and their neoconservative cohorts orbit, many lustily cheered a Cheney run for president in 2012; Bush’s superordinate vice president had enough sense to tease and then quickly squelch that notion and spare himself the humiliation of a 50-state landslide victory for President Obama.

Cheney, on cue, availed himself of the opportunity to produce another of his wacky spells of side-splitting clairvoyance the Republicans would be resurgent in 2010 and Obama would be a one-term president. With his shot-in-the-face record of the exact opposite happening, you’d think he’d bury his cloudy crystal ball and stop making an ass of himself in this way but, then, you don’t know Dick he seems to thrive on being wrong and then denying it. Regardless of the Beltway Conventional Wisdom, three races where the Republican won against miserable Dem candidates does not make a trend and, as the overworked Cocktail Party Punditocracy clich矧oes, “in politics, a month is like a year.” With Cheney’s smug regurgitation of this trite BCW on the glowing prospects for Republicans this year, it’s bankable that it won’t be quite as bad a year for the Democrats as the GOP would like it to be. And defeating Obama in 2012? Perhaps Dick should have a candidate in mind first to complete that task none of the current GOP front-runners would come anywhere near to pushing Obama out of the presidency except Ron Paul, and Cheney and the GOP elite loathe him.